The Secrets of Lahore

It was a big day. A Sunday with ICC Cricket World Cup fixture between the arch rivals. Pakistan was playing India in the lush green parks of Australia. With me it was a close call as I had to choose between an impending Sunday outing vis-à-vis staying home glued to the television. Having been an ardent follower of the game, the choice could have left me to the traditional ritual of tossing a coin, but quite contrary to that, it turned out to be an easy decision. Over the years, instead of being developed into a seasoned outfit, Team Pakistan has succeeded in becoming too “predictable”, and the term in fact translates to a convenient willingness of a handful of bewildered souls to ‘let it go without putting up a fight’. Hence, dear reader, a lifeless show of “flannelled fools at the wicket” was an easy choice to get relegated to the excitement of exploring the unexplored. On that cold February morning, my itinerary on it had the wandering paradise lying on the periphery of Lahore, as I headed towards India – Pakistan border. With the unfolding of the layers of a bright day, I was to come across the historical village of Padhana and in my visit, I was to meet a wonderful person by the name of Sardar Saifullah Sandhu.

The border stretch on the periphery of Lahore contains villages with a history. Old edifices of grand havelis, Gurudwaras, domestic forts; landmarks like kos minars, baolis and serais laying out the route of ancient Mughal Highway, the Grand Trunk Road; pre-partition mysteries and the post-partition Indo-Pak war memorials, and much more. A lot of history punctuates the countryside, where the land changes its nationality. I had frequented this area on foot and it was during one of the trademark evening sessions with “Chad Yaar” (my cohorts from DHA Lahore), when I was boasting about my ‘adventures’ in the rural outskirts of Lahore, someone mentioned of the village named Padhana. The point of conversation was one ancient haveli from the times of the Sikh rule in Punjab that had reported links to the court of Maharaja Ranjit Singh and thence to the colonial days of the British Raj. This cursory reference ignited further interest within me and on the very next available Sunday, I found myself at Coffee Planet Y Block (the usual RV for Sunday breakfast), where over a subtle dose of chocolate brownie with a double espresso shot, I had concluded my brief search and charted out my travel plan on the map template. It was that day, dear reader, when I dumped the India-Pakistan cricket encounter and headed out to explore the rural Lahore, yet again.

Following the alignment of ‘Neher’ (canal) right up to the point of its origin from Bamabanwala-Ravi-Bedian (BRB) Link Canal, if one continues on the exit from Lahore, having crossed the prominent village (stop) of Minhala, plying parallel to the running border between India and Pakistan, eventually reaches Padhana, the last village on the home side directly facing the prominent Indian town of Naushehra across the border. Ahead of village Lalloo, the metalled surface turns to kacha fair weather track and one has to negotiate the maze of inter-winding, worm like features, the defensive ditch cum bund, and while driving here the border fence stays right in the sight of a naked eye. The travel here is nothing short of a mini adventure, with this (hair raising) feeling of constantly being under observation of some invisible eye and the curious scrutiny from the every passer-by. Having reached the village, it wasn’t difficult to find the ancient haveli from the old times. I was conveniently guided to the place the route to which got dwindled past through a narrow street. Having parked my car beside a general store on the main street, as I inquired about the directions, was aptly afforded the luxury of cold drink and snack with a seat at the store as the word about their ‘guest’ was conveyed to the residents of Padhana Haveli. 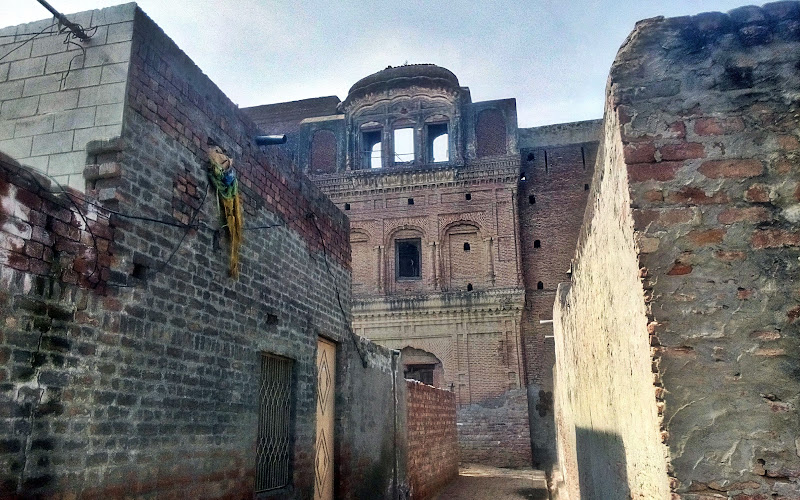 A young and smart fellow appeared and introduced himself as Sardar Saifullah Sandhu. My introduction and the reason of an impromptu calling on brought a warm and welcoming smile on the young lads face and I was led to my destination that happened to  be the very home of Sardar Sahab. Following the footsteps of my host, I entered the narrow street and having paced a few steps the profile of a grand edifice disclosed itself upon me. At the haveli, I met father of Sardar Saifullah and was afforded the full company and cooperation in a conducted tour of the Sandhu landmark in the village of Padhana. The haveli was a magnificent three story structure built of nanak shahi bricks. Its origin is associated with one Sardar Jawala Singh Sandhu and that gets traced back to the times of Maharaja Ranjit Singh. The origin of the village itself dates back to Mughal era, more precisely to the times of Emperor Akbar. The architecture is an amalgamation of Mughal and Rajput styles. The onion shaped domes, squared top pavilions on the corner turrets, bricked arches running parallel on multi-story structures and the paired pilasters give the building a real Mughal touch. The main building unit is the red burnt brick with the signature plaster of gach from old times. Years of neglect has resulted in the plaster wearing out and where it remains it has lost its true colors of yellow to a stale grey. There must have been floral frescos and intricate ornamental work both at the exterior and interior, of which what exist now are the (very) scanty remains at few odd places. The roof at the first and second floor has given way at most of the places and what remains as intact is crumbling under the weight of its torn layout. The haveli had been a complex of residential quarters (originally built in the times of Sardar Jawala Singh, an influential ally of young Maharaja Ranjit Singh) and annexed to one side used to be the katchehri; the court offices of Sardar Atma Singh (a divisional magistrate from the days of the Raj with jurisdiction in fifty two villages, as the gazetteers narrate to us). The katchehri now is entirely wiped out and the residential quarters also lie in ruins, where now the live stock gets herded. The family residences have moved to a partitioned corner, in a complex that has been rebuilt. In the companionship of Sardar Saifullah, I roamed freely in the (now) deserted residential portion and took a few snaps. The following gallery is an effort to highlight the battered architecture that once had the glorious and ornate features, the aesthetically decorated alcoves, in-lay frescos, bracketed eaves, ornamented friezes and much more. 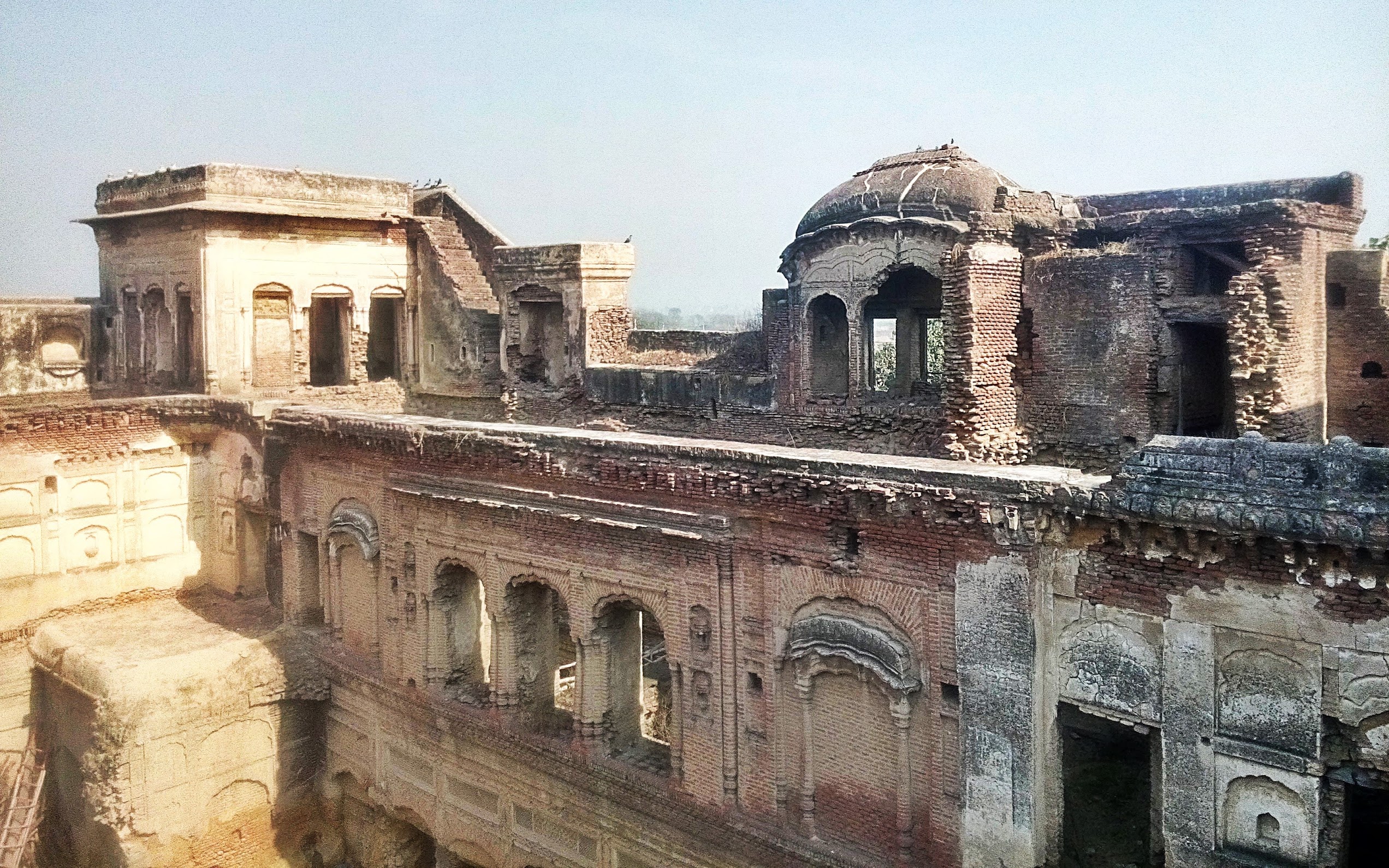 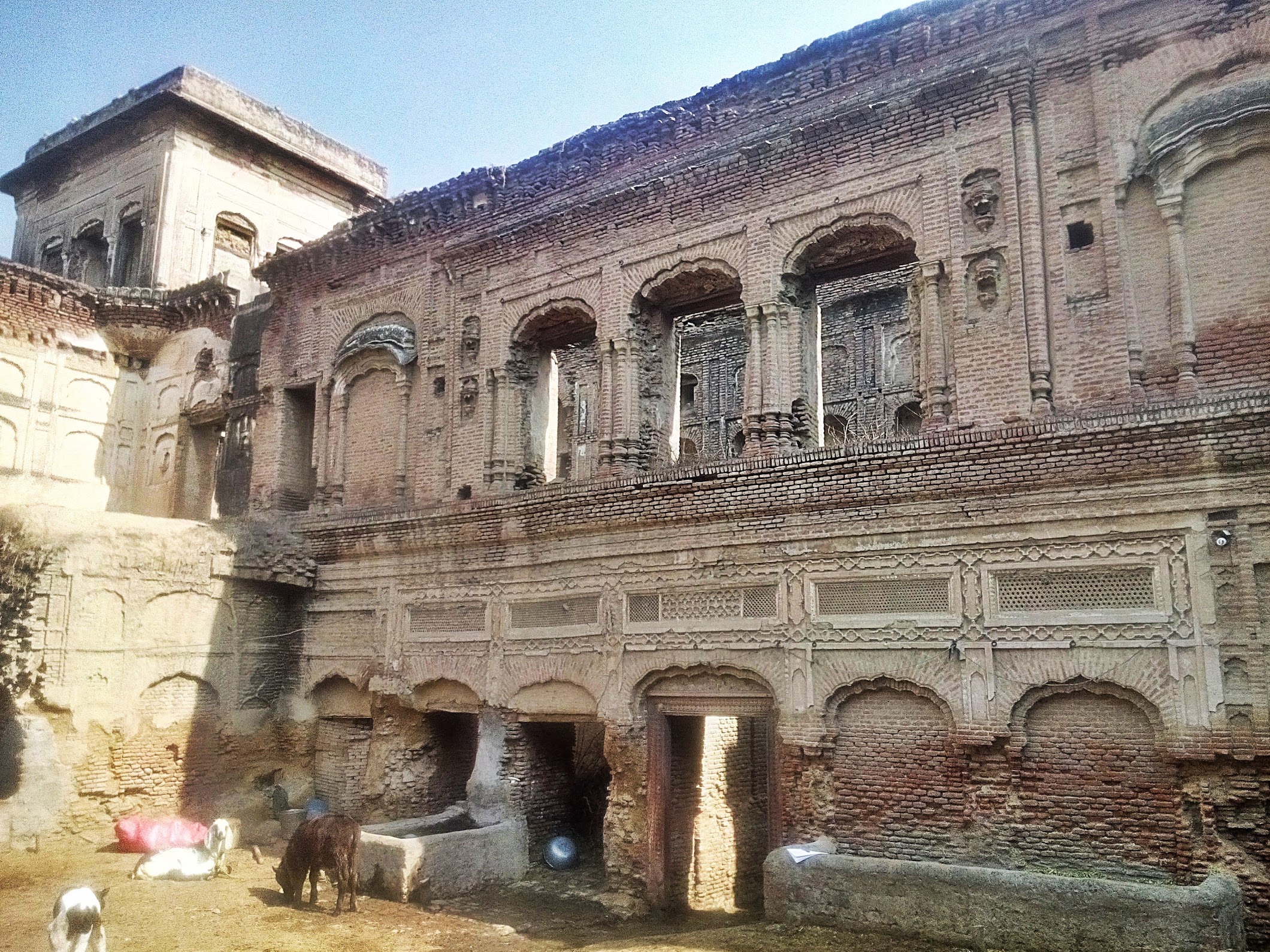 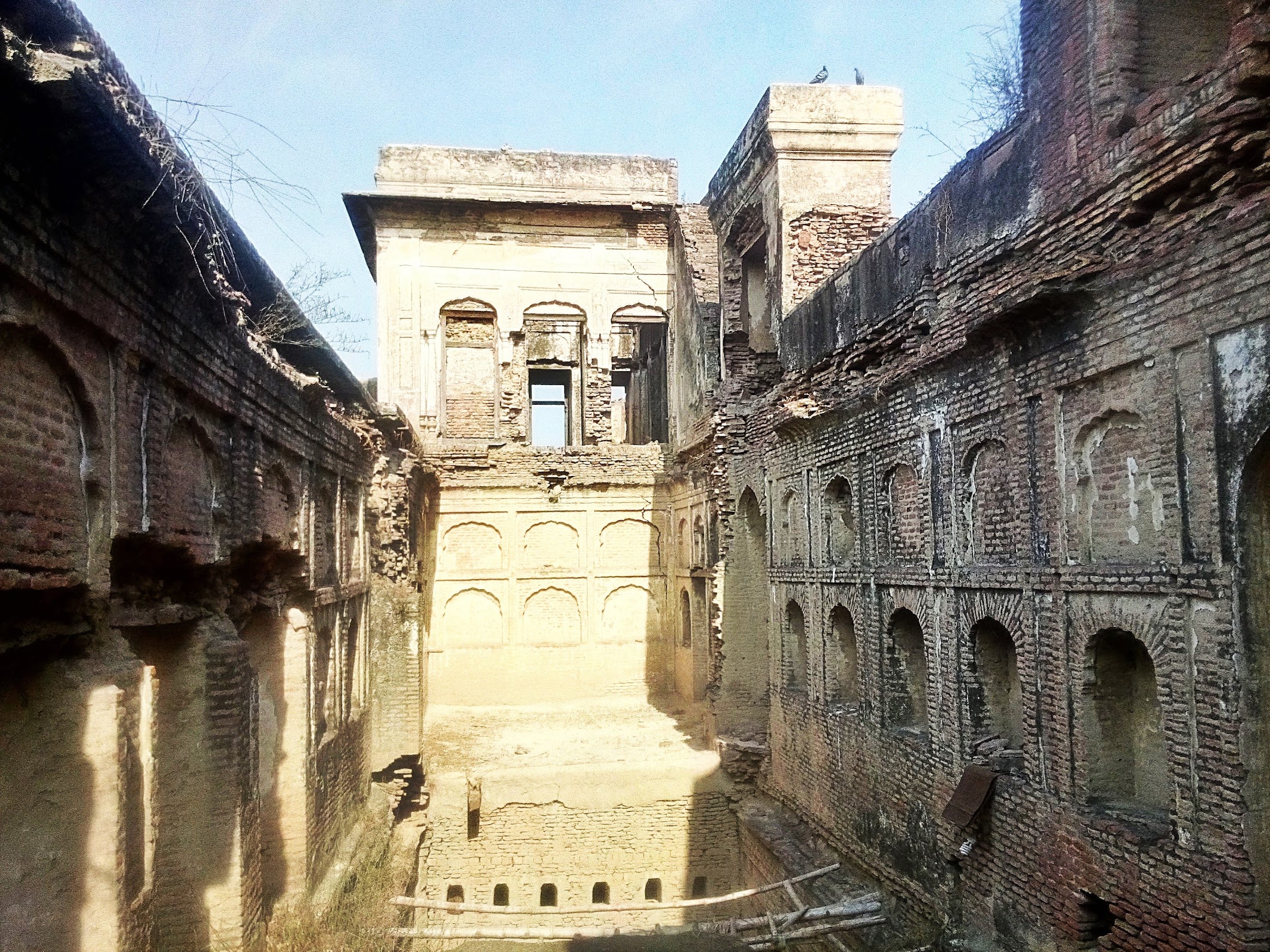 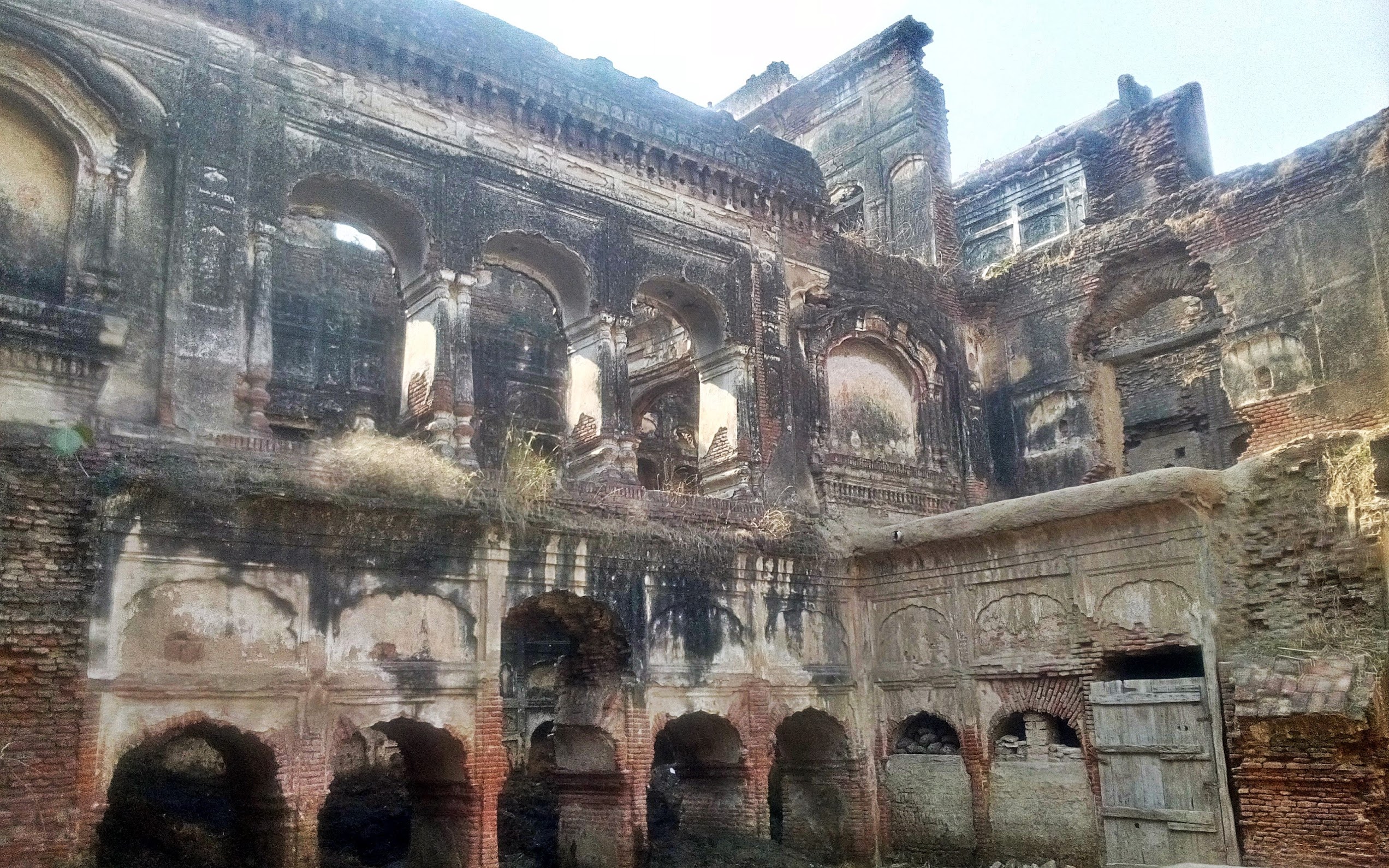 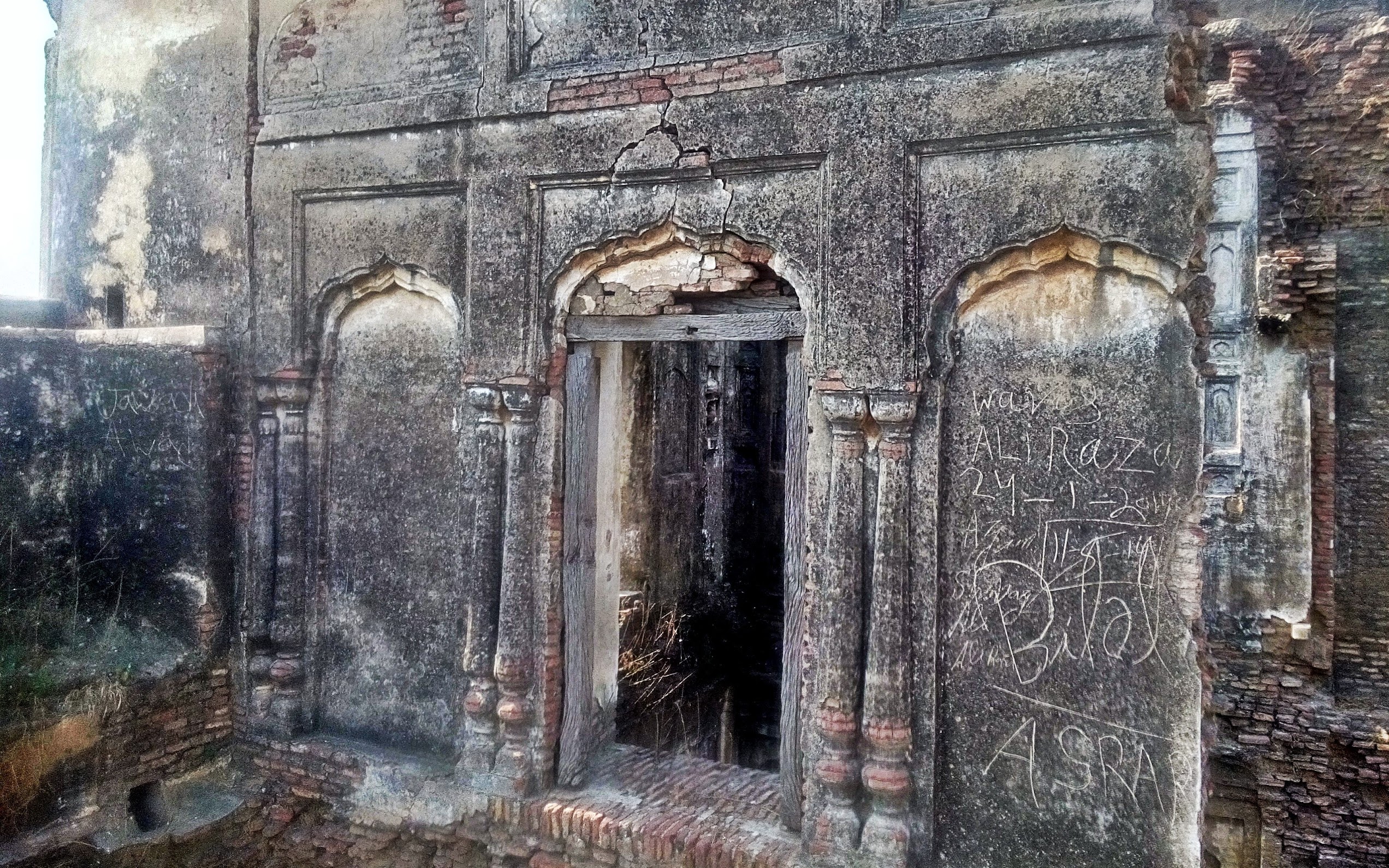 *complete album can be accessed here

Having visited the haveli, I accompanied Sardar Saifullah to the grave of his grandfather, Sardar Amanullah Sandhu (who embraced the new faith as Sardar Khazan Singh Sandhu) and dear reader, away from the tradition, the old man’s grave was not to be found in the village graveyard. We  came out of the village, took the kacha track leading to the border and little less than a hundred yards from the zero line turned towards the ancestral lands under cultivation. 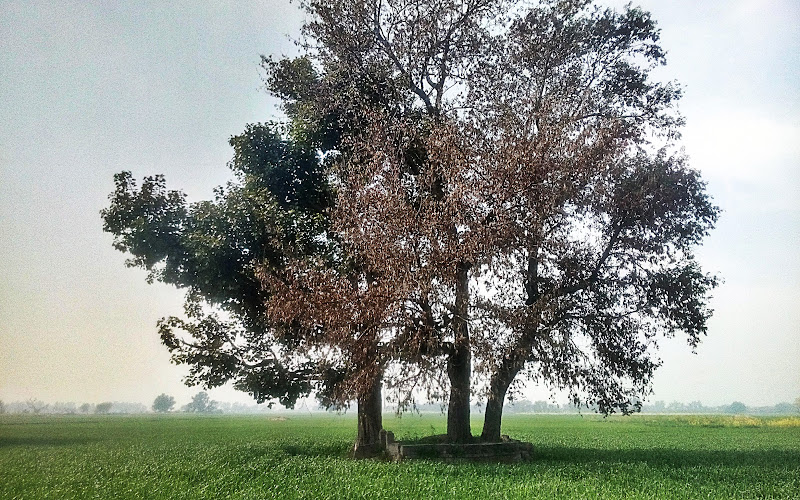 There in the vast stretch of the fields, under the scantily branched twin trees lies the grave where Sardar Saifullah’s grandfather is buried. Sardar Amanaullah, at the time of partition had decided to stay in Pakistan and eventually was buried in the land he had very dearly owned and toiled at to earn a livelihood. The lineage of Padhania Sandhus takes us back to the times nearing 13th century, once they emigrated from Afghanistan and inhabited the village of Manjha.  A Jat Choudhary of prominence in the days of Muhgal Emperor Akbar, Chaudhary Changa is reported to have founded the village of Padhana, north east of Lahore. Further down the bloodline, we come across a prominent Sardar Jawala Singh, a loyal to the darbar of Maharaja Ranjit Singh. An able and brave leader, who distinguished himself in the campaigns of Multan, Mankera, Kashmir and Attock.  Sardar  Jawala Singh was reputed to be a generous human being, who while administrating the village of Padhana never charged the monetary taxes or rent from his disciples. Upon his death, a considerable portion of the jagir entrusted upon him was resumed by Maharaja Ranjit Singh. Another name in the Padhania Sandhu lineage is that of Atma Singh who was the head of the family during late 1880s and was appointed to be the Honorary Magistrate by the British government. Owing to his loyalty to the Raj, he was granted a Sanad by the viceroy. A nephew of Sardar Atma Singh was Gurubakhsh Singh, whose son Sardar Harcharan Singh having embraced the new faith was named Sardar Nasrullah. Sardar Amanullah Sandhu, on whose grave we stood that afternoon was the son of Sardar Nasrullah. The lineage of Chaudhary Changa got divided at the time of partition. The Muslim and Sikh factions of the Padhania family, though reside on the opposite sides of the international border, yet mingle through frequented visits to each other.

The landscape at the international border between India and Pakistan across the fertile stretch of Punjab bears the colours of of peace and conflict alike. Around the front defences of ever alert, ever agile and ever opposing security forces, people go about their usual routine of the calm and tranquil rural lifestyle. Outside the village of Padhana, at the grave of Sardar Amanullah Sandhu, I inhaled the quite and still air, and I sensed the abrupt divide in the immediate neighbourhood. A dividing line that had direct links with ideological diversity in the lineage of Padhania Chiefs, that made Sardar Amanullah to choose the land of his ancestral livelihood and the others to move across to new lands. Padhana has stories to tell, stories from the rich past, of the present divide and of the future hope. On that February afternoon, at the border village of Padhana, I benefited as a student of history, as much as an apprentice of ancestry. Dear readers, it was fun as much as it was learning.

References:
“The Punjab Chiefs; Historical and Biographical Notices of the Principal Families in the Lahore and Rawalpindi Divisions of the Punjab” by Sir Lepel H. Griffin, published by Civil and Military Gazetter Press Lahore, 1890
A special mention of Sardar Saifullah Sandhu is due on me. He was very kind to spare the time in showing me around and has been a source of very useful pieces of information  ever since my visit to Padhana.