The Land of our Ancestors: ‘where unicorns roamed’

look! with such a grandeur and vigour, those come down!
the waters of Saraswati,
which is the seventh of them
and the godmother of all streams …

A civilization that had existed, flourished and survived for half a millennium, its roots dating back to thousands of years Before the Common Era. The people here organized a community living with remarkably advanced knowledge of tools and aesthetics. They were the master artisans, tradesmen and craftsmen. They communicated in unfathomable texts and there were mythical animals that roamed around them. Then it mysteriously disappeared and remained hidden for 4000 years. The accidental discovery of its ruins in early 50s of the twentieth century gave rise to a vast array of excavations in the subcontinent and, dear reader, it was then we came to know of it as The Indus Valley Civilization. Taking its roots from the stone age and maturing itself in the bronze one, this layer of human history was well sophisticated in social and economic tiers. In its maturity and finesse, the Indus valley gets compared with the contemporary civilizations of Ancient Egypt and Mesopotamia.

I had known it from the beginning of the times; even earlier than that. The primary grades’ curriculum of mua’asharti uloom (social studies) talked of Mohen-Jo-Daro as an icon from a bygone civilization, the aesthetics of which competed with the modern times. In a way it was my first inspiration (to be matured into a romance over the years) with the Indus; the mighty Sindhu and the dazzling colours of Mehran. While on the subject (of Indus Civilization), the other name that appeared in the texts along with Mohen-Jo-Daro, almost as an inseparable twin was that of Harappa…
As an avid collector of stamps, one of my prized possessions were the ‘Save Mohen-Jo-Daro’ series featuring the iconic Priest King and the Scripted Bull seals. Both the language and the symbols on seal-stones have given a touch of lore to the tale of Indus valley. I have long fancied the myths surrounding the riddle of Indus; the unintelligible code of symbols and equally mythical creature of the past days, the unicorn bull…
And then I fell in love with ‘Bahao‘, a novel by Mustansar Hussain Tarar. The story put to life, through fictional characters, the great civilization that we still are in the process of exploring and assimilating. The towns of “Hari Yopia” and “Mohanjo“, the powerful characters of “Paroshni” and “Verchen“, the beautifully conceived and fictionalized dialect of conversations, and to top it all, the supernatural powers with the flood waters; waters that formulated and transformed the very basics of the Indus valley culture. Tarar Sahab had presented history in romantic fiction…
A childhood inspiration, a fanciful mythology, a romantic fiction, there was every reason to fall in love with that ever-present, constant itch in the heart to go visit these magnificent sites, and where else to go, dear reader, but the most deliberately explored site of all, Harappa. In that early summer morning, concluding a business trip at Multan, as I bid farewell to the services club, I was all heart to embrace the ruins of Harappa on way back to Lahore. On a bright and freshly baked pre-noon day, the ruins of Harappa welcomed me, with all their facts and myths alike and I returned the favour with all the excitement of  an avid explorer. 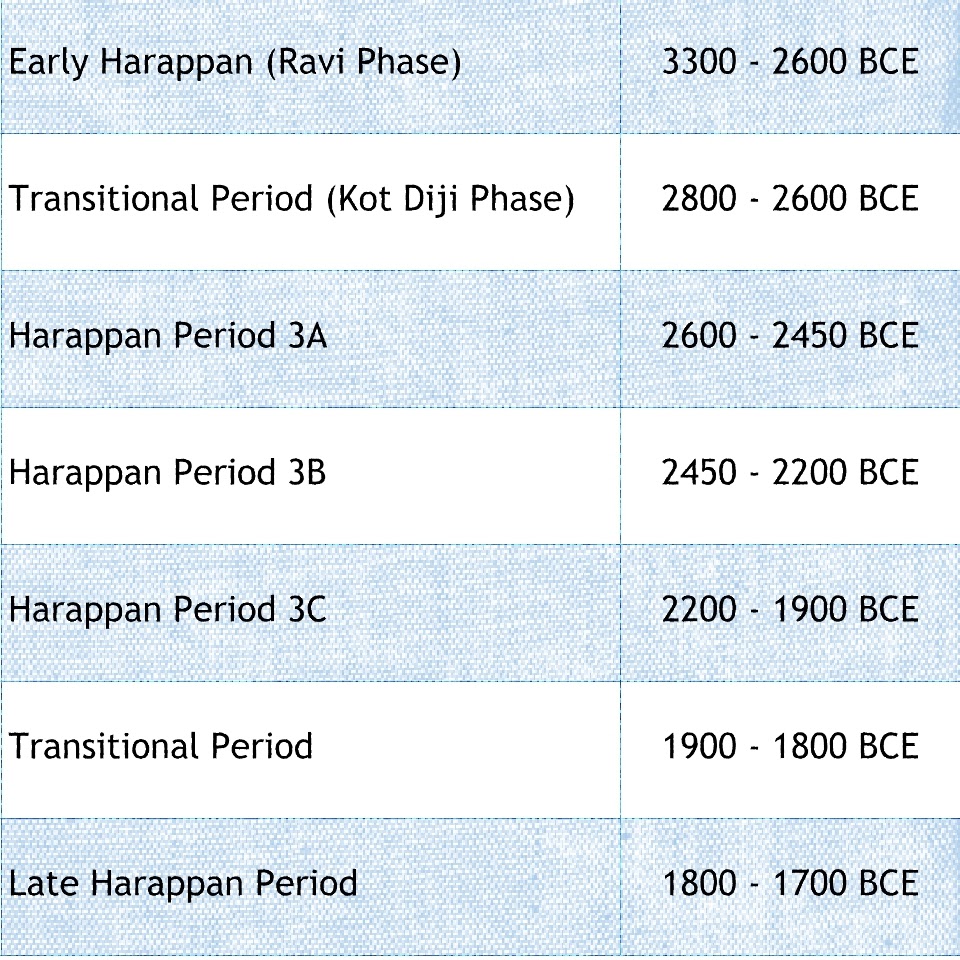 sites where an unbroken pattern of occupation is discovered. The excavation sequence covers the early Harappan, urban and post urban periods providing the key archaeological clues to the evolution of the city. In its full swing the city of Harappa is believed to have been bustling with a population estimated between 25000 – 35000 inhabitants. Present day excavations lie south of the dry bed of river Ravi (the river in changing its course has further shifted north by a few miles) and the access to its waters is believed to have been one of the key factors inspiring the early Harappan settlements.The early excavations at Harappa date back to 1872-73 by Sir Alexander Cunningham. The systematic excavation was undertaken in 1986 by Harappa Archaeological Research Project (HARP) and today it’s the largest Indus site excavated in Punjab. 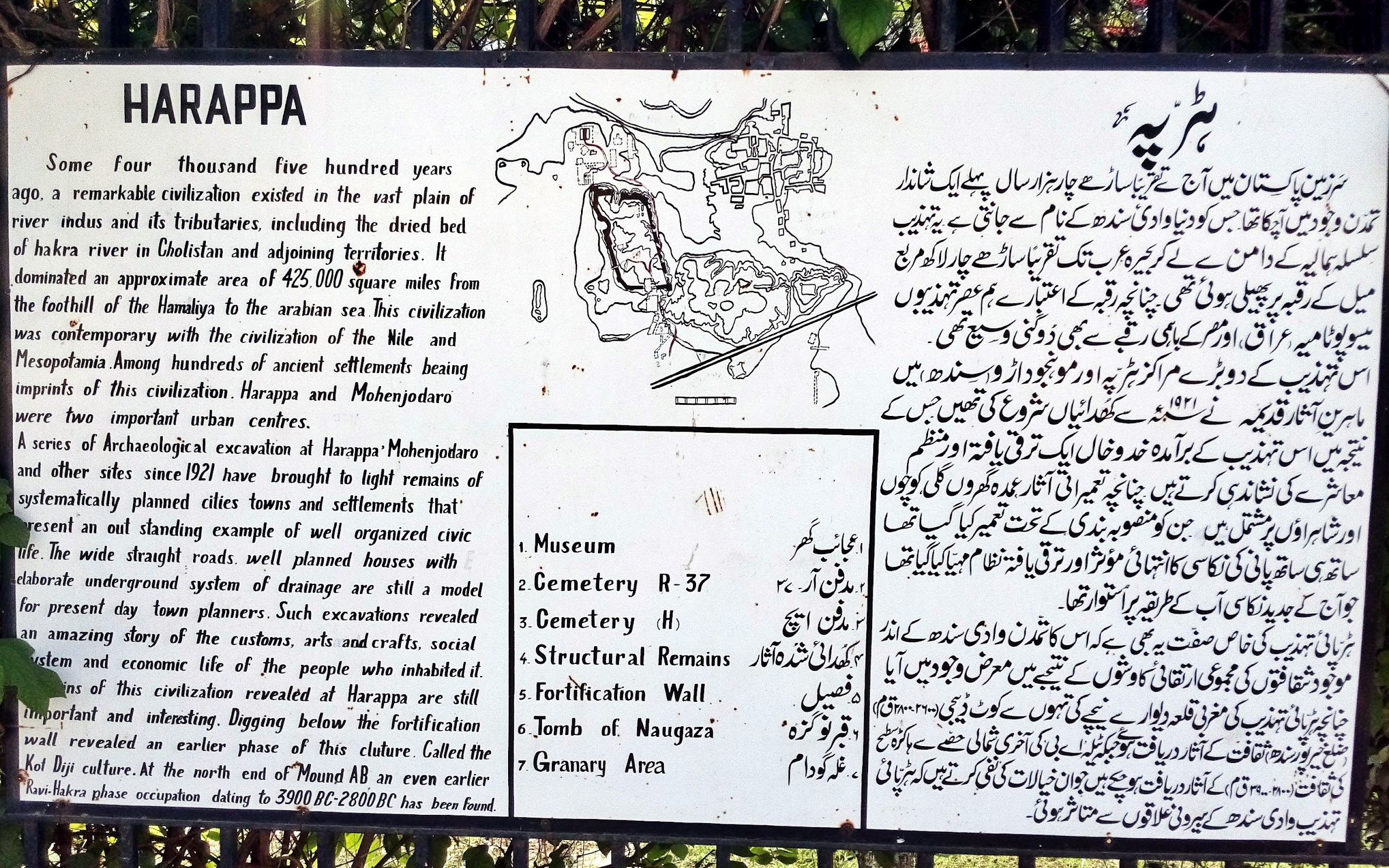 Upon reaching the site, a “grand board” welcomes us indicating that the excavations on site are demarcated into distinctive low mounds named as AB, E, F and ET along with the remains of the two cemeteries R-37 and H. Harappa, dear reader, presents itself to us as a collection of suburban towns spread around a central depression that might have been a tank / a water source. The numerous mounds that hold the riddle to the building blocks, scatter the area and are features gaining a height of around sixty feet on places. These mounds had thick mud brick parameter walls and bricked gateways with bastions at regular intervals. Within the parameter wall the fired brick buildings were constructed on to a mud brick platform that rose around 20-25 ft in height. The well and the bathing / washing platforms and the established drainage system truly reflects the obsession of the inhabitants with water that is one characteristic of Indus Valley Civilization. People of Harappa were skilled craftsmen with the materials both indigenous and imported. They had achieved a remarkable accuracy in the measures of weights and scale and had the way of working with a number of metals including bronze and copper. To communicate, they used the symbolic script, a code of the Indus valley that is yet to be deciphered.

AB and E Mounds were the population nuclei on Harappan settlements. The ruins on these mounds are of the structures from the matured urban period from the third millennium BCE. The bricks initially clay and in later periods the fire baked, were the principle building material at Harappa. We come across the remains of a mud brick parameter wall towards south east of mound E and there is evidence of a gateway in the area of Mound E/ET. A wide entrance street ran north-south adjacent to the parameter wall and had a drain running beside it. The general orientation of the streets on Mound E is found to be east-west with an inner gateway followed by the rows of houses on either side. An artistic conception from Chris Sloan (my readers would find the picture aligned right to this paragraph) recreates for us the gateway and the main street and drainage in the light of the archaeological finds and measurements. In the later periods the habitat at Mound E expanded and the occupation shifted to Mound AB transforming the small town into a fairly large urban center with the power structure shifting to the latter mound. It is at Mound AB that we come across the modern era fired brick construction. There are the remains of a large public bath with a well and the bathing platforms and an intelligently laid out drainage. On Mound E there are partially excavated remains of a Mosque that is believed to be from the early Mughal period.

F Mound has the remains that are believed to be of work stations, a city hall and the granary. Towards the immediate south of the mound F are the remains of the ‘great hall’ of Harappa. The ruins of this great building suggest it might have been used for administrative purposes or as a community hall. In this area we also come across the circular platforms which were supposedly housed in separate rooms. These platforms were either the workstations for the Harappan craftsmen or these were the places to husk grain. These platforms if believed to be for husking grain suggest that Harappans used wooden pestles to pound grain in the mortar. The foundation of the granary found on Mound F reveals a large 51 x 45 meter structure with two rows of six rooms on each side with a pathway in between around 7 meters wide. Each room identical in dimension has three sleeper walls with spaces in between for air passage. Though not an established fact, but this foundation is widely believed to be a grand granary from the urban period at Harappa.

ET Mound holds for us the remains of a parameter wall with a gateway having the evidence of corner bastions which appears to be from the initial mature urban period from around 2600-2400 BCE. There are remains of a colonial era police post on the mound that more or less resembles the typical dak chowki one finds on the Grand Trunk Road. There is a small rest house on the site and an on-site museum that holds the artefacts excavated from Harappa. These contain the cooking pots, pottery sherds, tools made of bone, stone, bronze and copper, jewellery to include terracotta beads, etched carnelian beads, clay bangles fired up and painted, steatite seals, the remains of the coffins and the human skeletons. One of the novel finds from the site are archaeo-botanical samples in the shape of carbonized seeds from a variety of species. There are two designated cemeteries excavated at Harappa marked as burial plots R-37 and H. There were evidences of burying the dead faced to a side with a number of pots  placed in the grave for provisions in after life. On occasions wooden coffins were used in line with the Mesopotamian practice. The burial area H is typical in terms of pot burials and it is believed that it housed the graves from the later period, most likely from post urban period. The pot burial graves in H Cemetery are believed to be of foreigners or immigrants on Harappan soil. 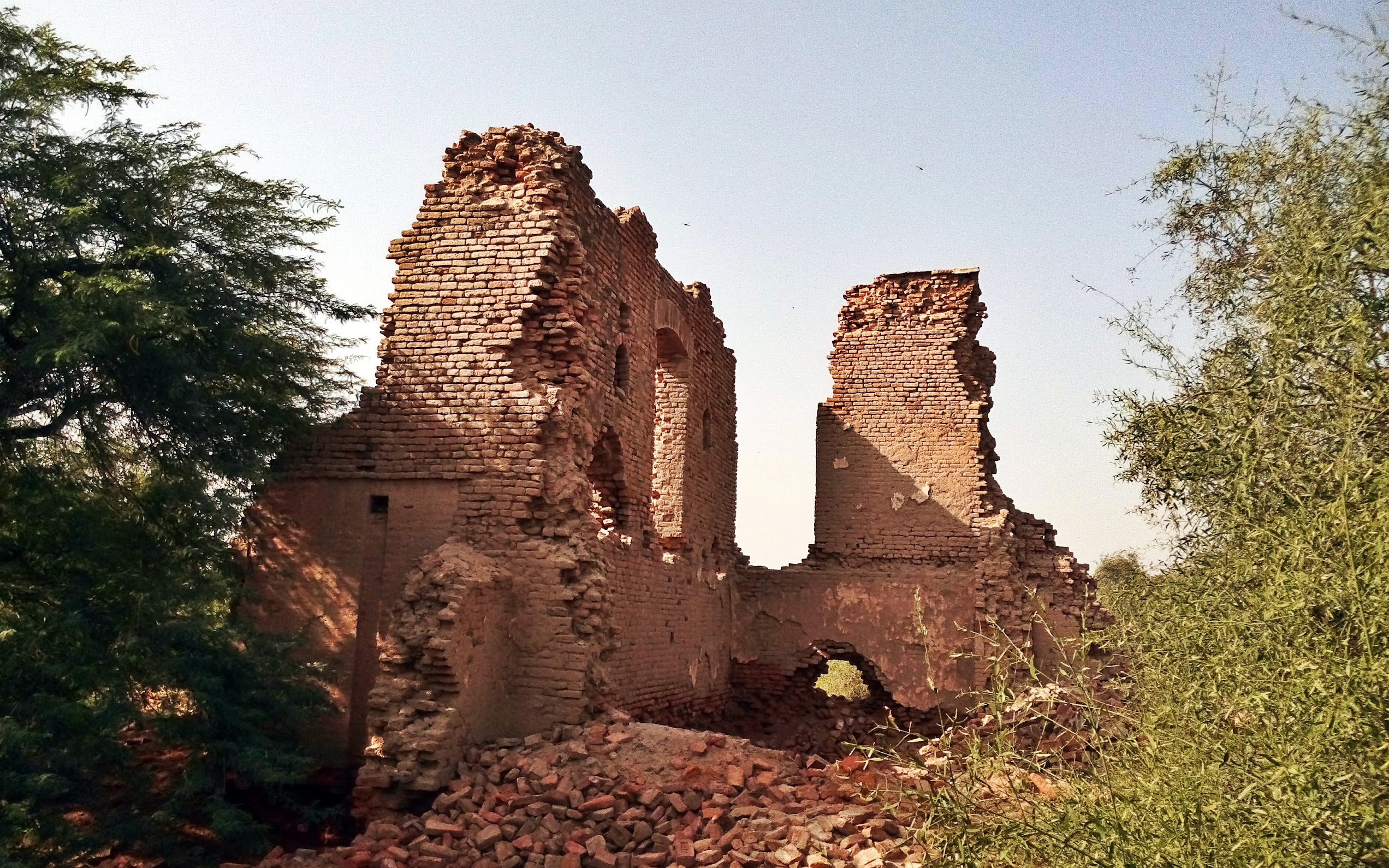 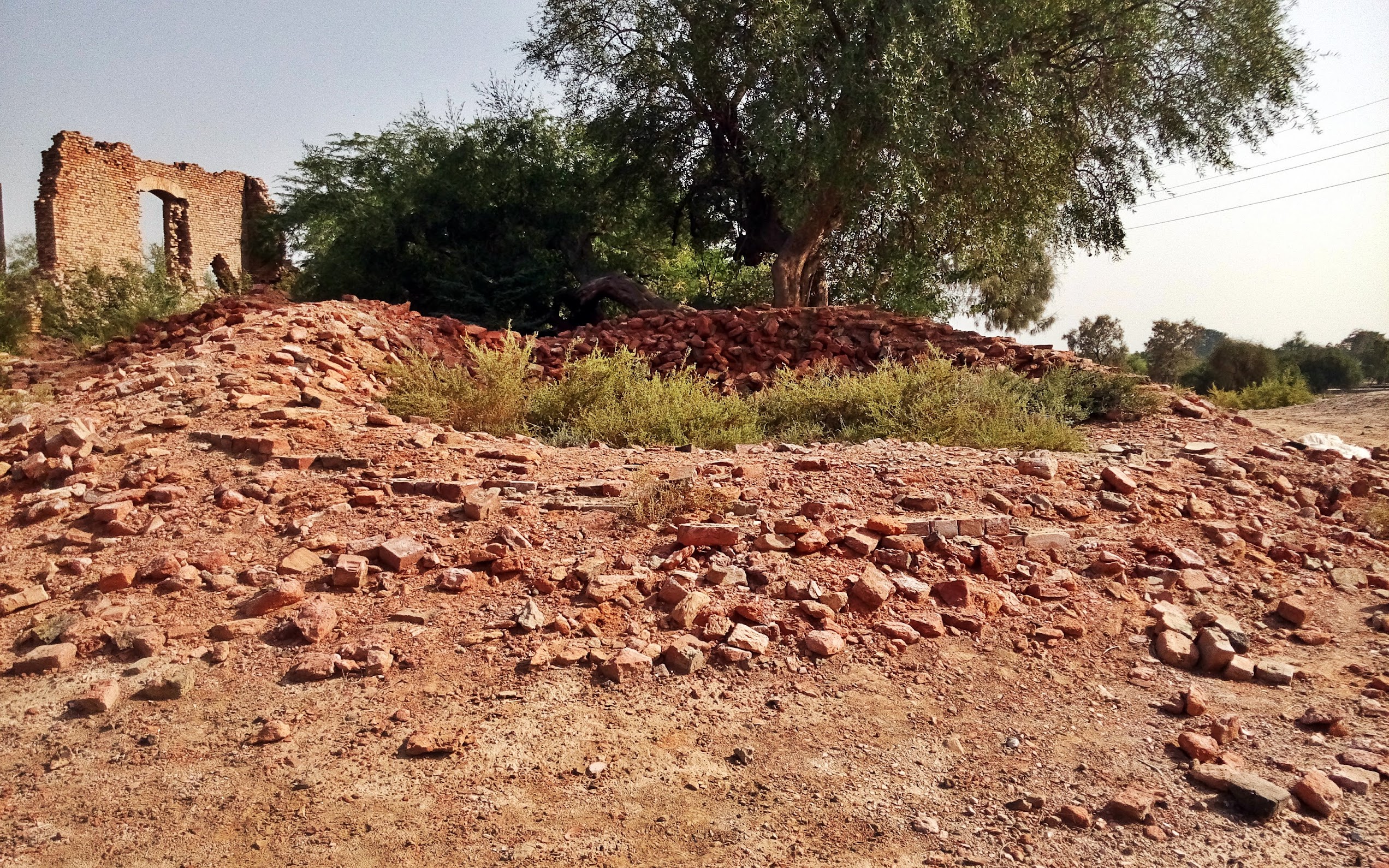 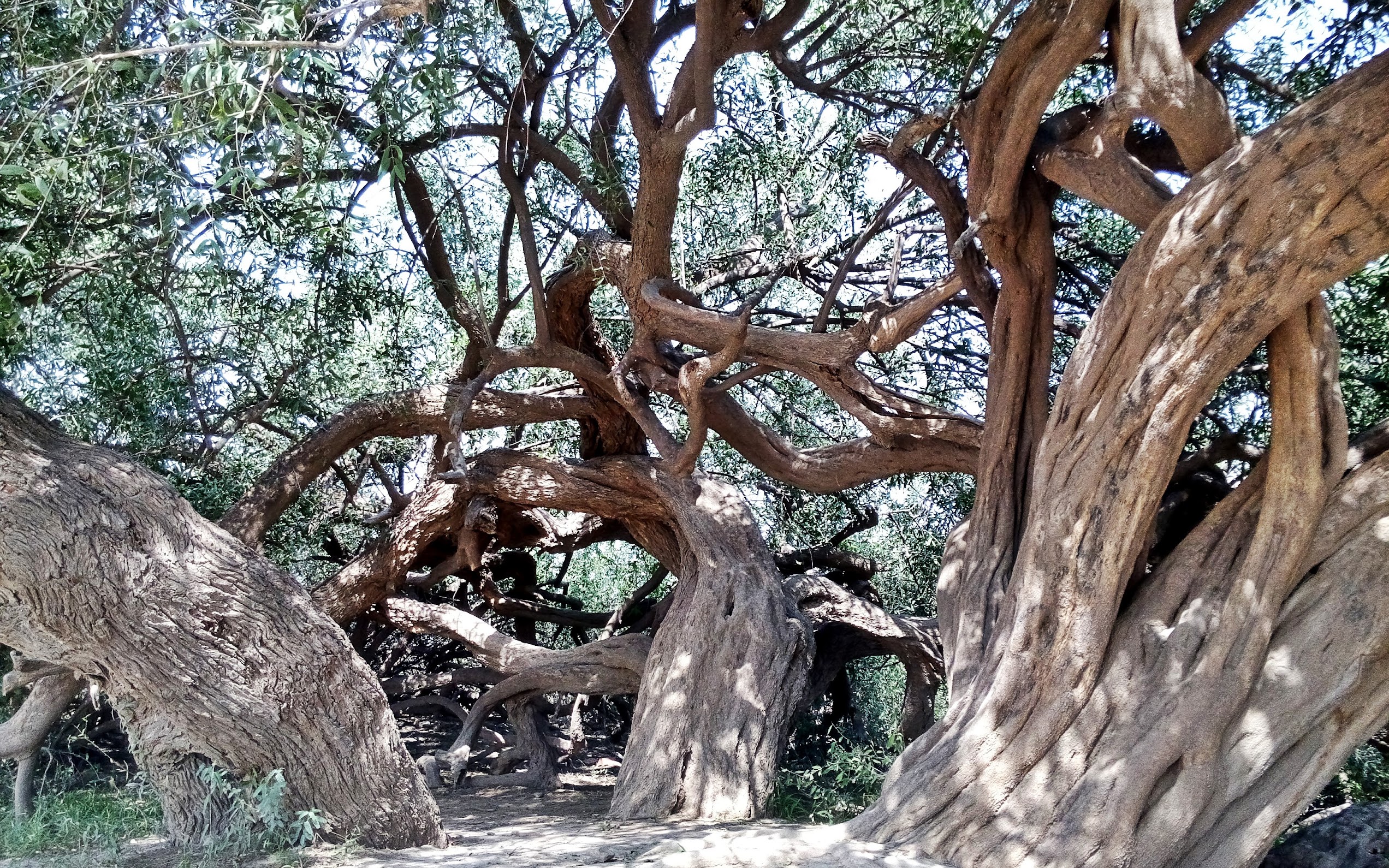 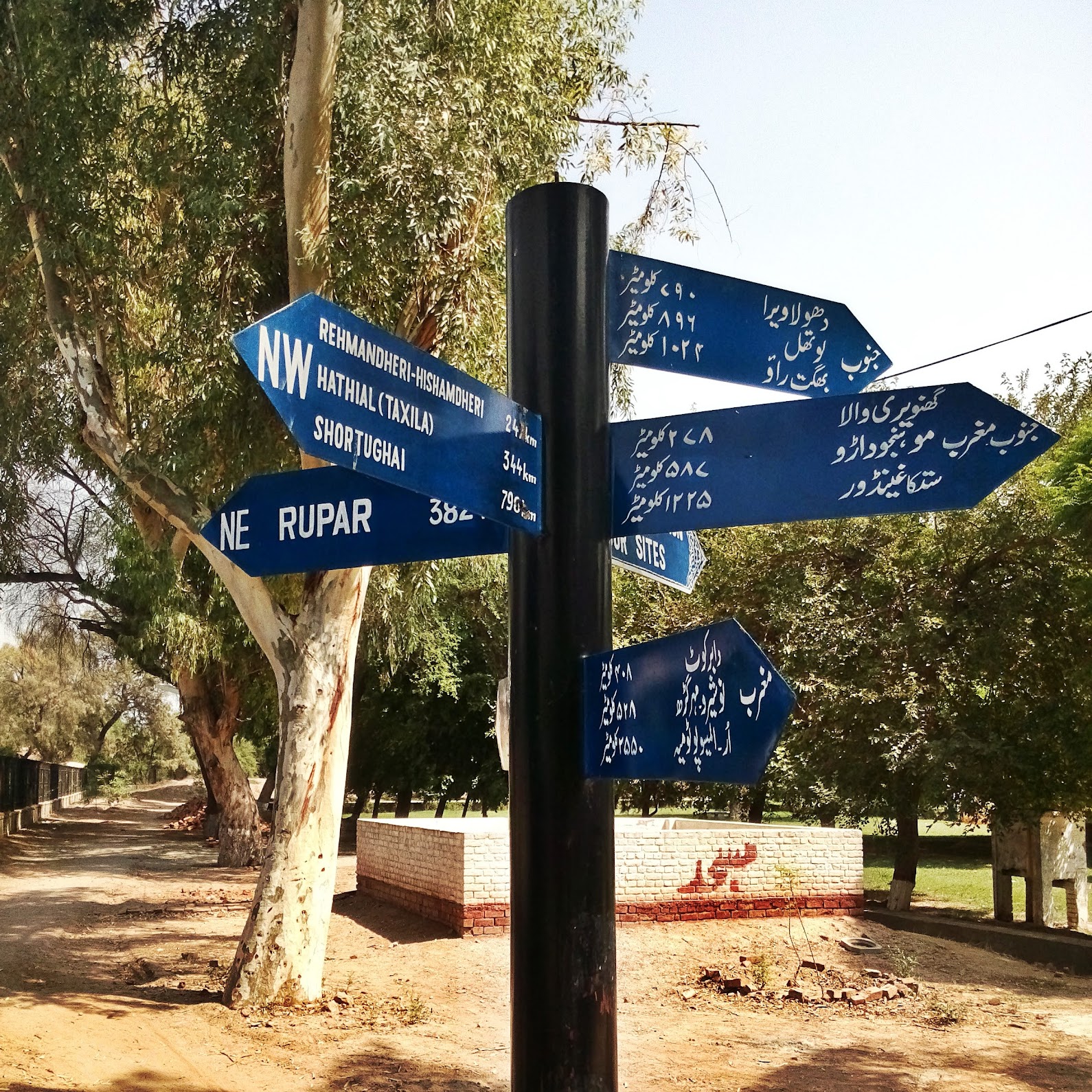 I roamed far and wide in the Harappan Mounds, exploring the clues to my ancestors and learning how they made a life, and I did that under the high noon scorching sun, and in doing so, dear reader, I became to resemble one of the baked bricks freshly out from “Paklee ka Aava” (some kiln belonging to my beloved from ancient times). It was time to call it a day and bid farewells. On my stroll out of the ruins on the concrete pathway, I enjoyed the scanty shades from some old trees (Tamarix Aphylla – the Frash, Prosopis Cineraria – the Jand and Capparis Decidua – the Kareer) that are believed to be the remnants of the ancient Rukh Forest. Coming out of the Harappan site that afternoon, I thought of the ancient times. Times when the landscape wore the colors of red and khaki and green, the streets bustled with people, the dark coloured and broad nosed ancestors of ours, the aboriginals of Indus Civilzation. I imagined the slow traffic of bull carts laden with the sacks of grain making their way through the crowds. In near distance sounded the clink of bronze and copper and stone moulded by some crafty hands into finished collectibles. The colours of the evening turning to amber amidst the grand husking of grain in nearby quarters. A longing for the warm and gentle shower and steam at the community baths after the physical toil of the day. The impending, post supper visit to the calligrapher to practice the penmanship on a script I don’t decipher but do identify with. And just there towards the street corner a ‘passing by’ stop to watch the seal makers moulding the clay and stone and bronze tablets and etching on these nothing but one obsession, the unicorn bulls… 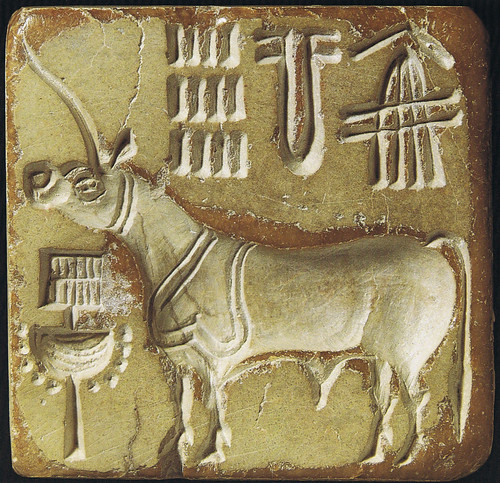