The musical hit “Chalte Chalte” from Pakeezah is an all time favourite. My readers of good taste will agree that there’s a lot to revere here. The musical genius of Ghulam Muhammad, perfectionism of Kamal Amrohi, evergreen and ever enchanting Lata Mangeshkar, expressions and the crafty eye-nods from Meena Kumari and much more. There’s a different reason though, for this melody to be mentioned here and a clue to that, my dear readers, is twined in the culminating notes of the song, where there’s fused a whistling shriek, the departing coo coooo…. of a vintage railway engine from the by-gone days of steam. It was mentioned, in the same dramatic way, by my Commanding Officer (and a companion on the subjects of literature and classics) Lieutenant Colonel Bhatti, as we watched Pakeezah in one of the military exercises (people of insight refer to these exercises as “schemes”). The discussion took its roots from a mutually shared passion, the railway. The song in question ponders over the odds of finding a soul-mate in the wandering travels; no ordinary travels, but the ones associated with another charm, the romance of railways. Col Sahib, himself an ardent fan of railways, derived his inspiration from the hazy yet glowing scenes of Ijaazat (the movie) and the literary masterpieces on Railway Waiting Rooms whereas, I, on the other hand was a seasoned customer with experiences aplenty in the said mode of travel. That evening, together we revered a great song in exact proportions as we revered a great romance with one beloved entity, the railways!

Though built out of the native resources of labour and materials, the plan and its manifestation was essentially foreign, the one inherited from our Colonial Masters. We inherited the North Western Railway from British and it came to us with all its Gothic features and Victorian manners. The glistening steel and metal, the all durable wood and rake, cabins and their lever mechanisms, wandering platforms studded with the block buildings of offices and waiting rooms, solid and heavy inventory, old stationery, printed cushion jackets, mahogany furnishings and much more. This heritage has everything to entice the heart and I am one wanderer on the trail of this romance. I am in love with the railways and the paraphernalia. Dear reader, it was for the love of tracks that I embarked upon exploring a far flung railway outpost on India-Pakistan border and just when I was to embrace the destination that morning, thoughts came flooding back to me, thoughts, dear reader, with the mention of which, this post begins.

They say, the last train to arrive and leave this station was a couple of years back. In the glorious pre-partition days, it is reported to have been the busy hub on the rail-route Bahawalpur – Bahawalnagar – Bhatinda – Delhi. It was such a busy route in the days of steam that deviating from the routine of having one, dear reader, you upon visiting the station would find two water tanks, one on each end of the platform. A place that served as a major halt on a busy route, post partition got alienated to be one deserted platform on the border stretch. Soon the destinations in both the lands were to be redefined and the routes to be realigned. Traffic is life for a communication network for it disrupts the usual monotony and keeps the pulse ticking. The railway traffic, in its departing flinched away the soul of the erstwhile busy travel hub of Mandi Sadiq Ganj.

Mandi Sadiq Ganj lies on the Indo-Pak border ahead of Bahawalnagar in the vicinity of Minchinabad. I was in Minchinabad that morning, out to explore an architectural edifice of prominence from pre-partition days. It was there, when my host at Sukhereyan di Haveli mentioned to me a one of its kind, colonial era tile work in the Railway Station of the neighbouring town of Mandi Sadiq Ganj. Little did I intend to drift from my set route that morning, but then it was for the railways’ romance that I found myself driving to this border outpost as I exited Minchinabad. In a small border town, like any other small town, locating the intended destination is never a problem. Only in border towns people are a bit more skeptical of the intention of the visit by a non local. Here the military background came to my rescue as I was welcomed by a group of young gentlemen enjoying tea at a filling station just on the periphery of Mandi Sadiq Ganj. Having exchanged the pleasantries, I parked my car at the filling station and headed for the Railway Station on foot, that was in close vicinity.

The first thing to come across were the grain silos, a dysfunctional and abandoned annex to the railway station. The platform was quiet with a dilapidated board announcing the name of the destination. The building was commissioned in 1892 and carried a touch of grace from the glorious past. Everything was serene and peaceful, but it was that uneasy silence that oozed out from the place and soon I realized the source of it. The tracks reflected a rusty red and partly disfigured alignment for not been in use for quite some time. The water tanks on both sides of the platform with eroded iron sheets added to the misery of the sight. A couple of the incorporating structures on the periphery of the railway station bleeded red with bricks peeling off here and there. The ghost of Mandi Sadiq Ganj got exposed to me as one abandoned component of the mostly dysfunctional railways machinery of Pakistan. A place that had bustled with life in the colonial days of the Raj was plainly dumped by an ‘independent’ Pakistan. I might have continued with the soliloquy had it not been interrupted by two old people who later got introduced to be the veterans from Pakistan Railways. I told them that I was there to see the ‘world famous’ tiled mosaic from the days of Gora Sahib and there was a sparkle in the eyes of the old fellows. One of them arranged the keys for the padlocked waiting room as the mentioned attraction was there decorating the waiting room’s floor at Mandi Sadiq Ganj Railway Station. 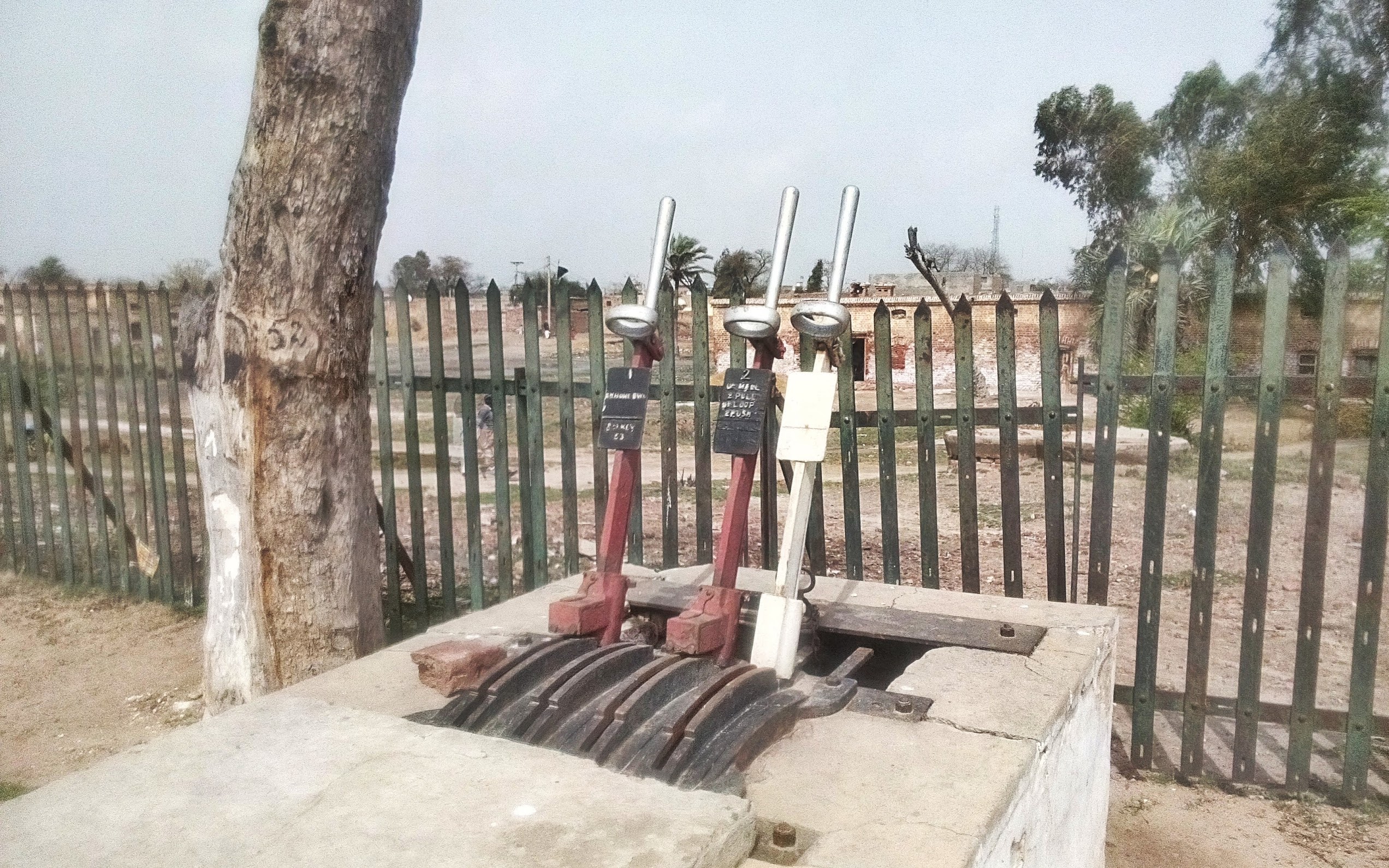 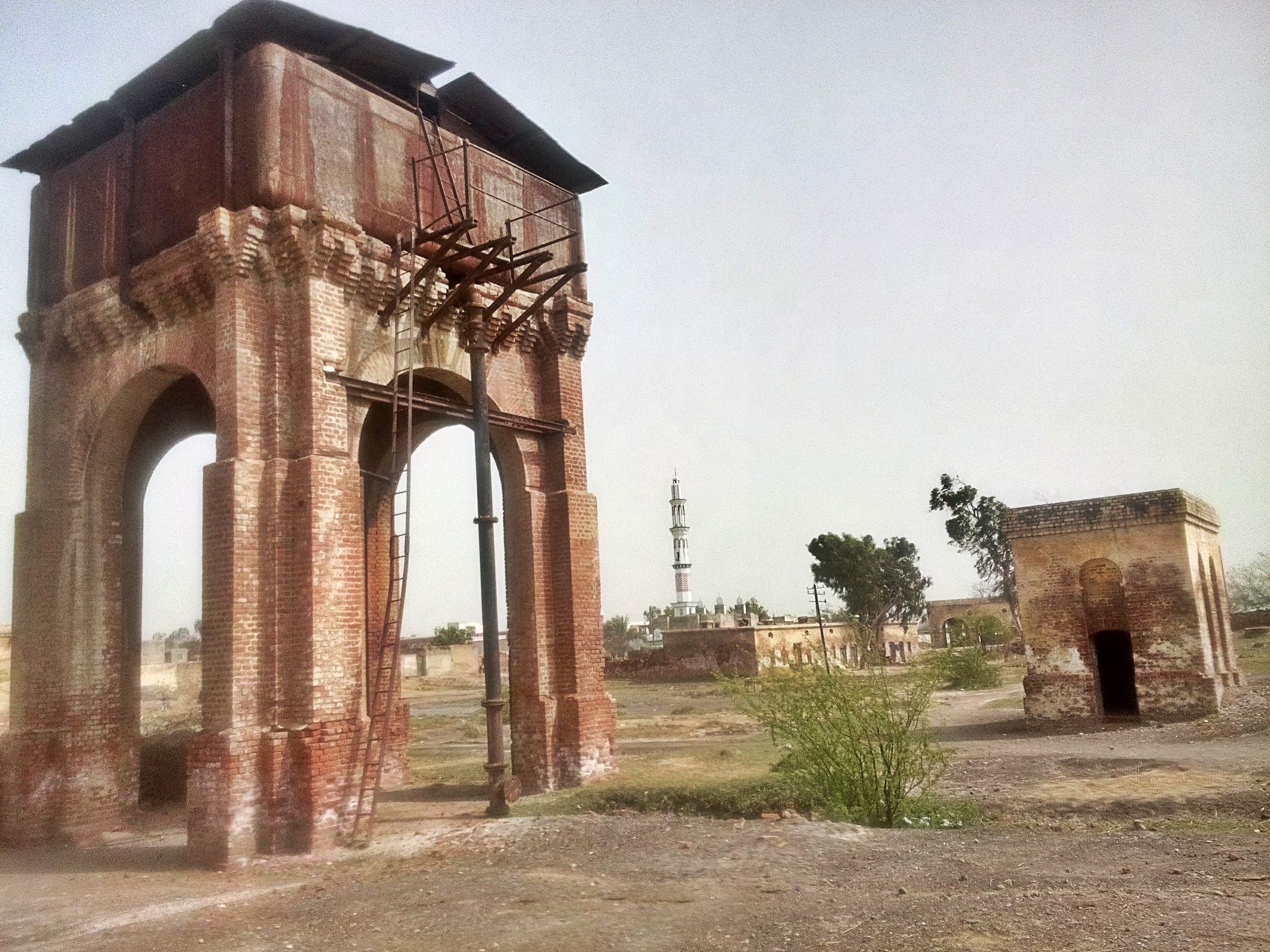 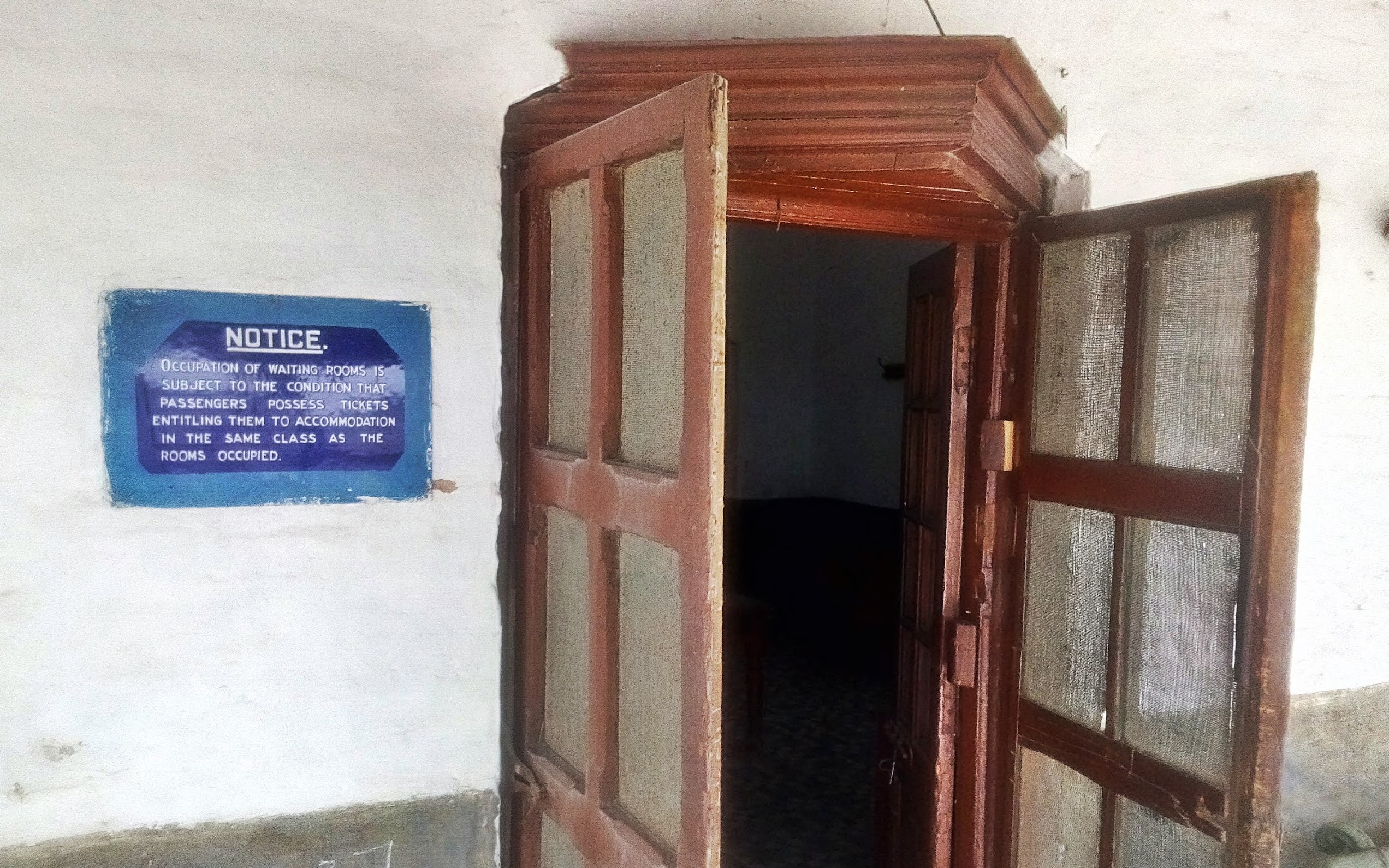 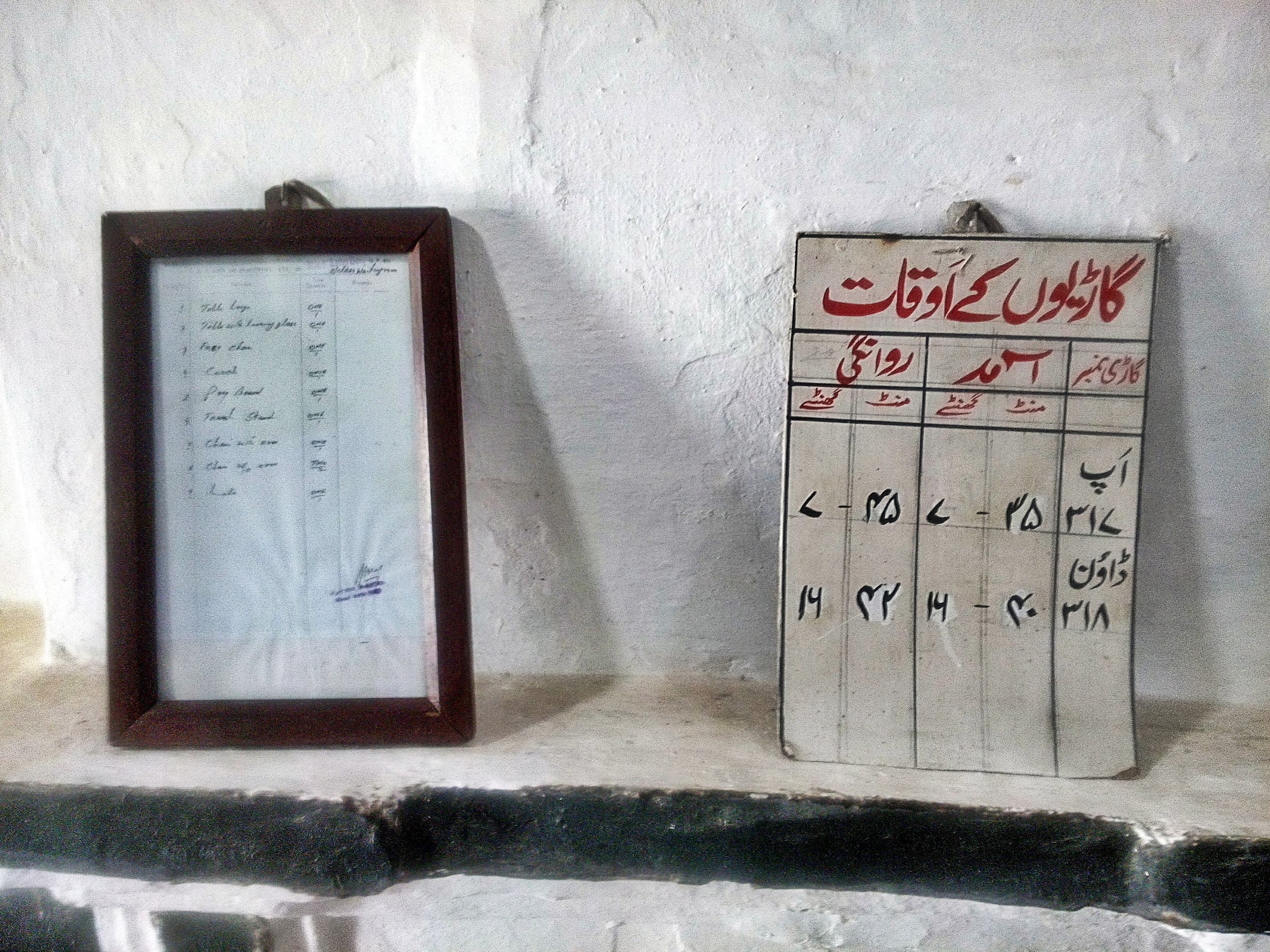 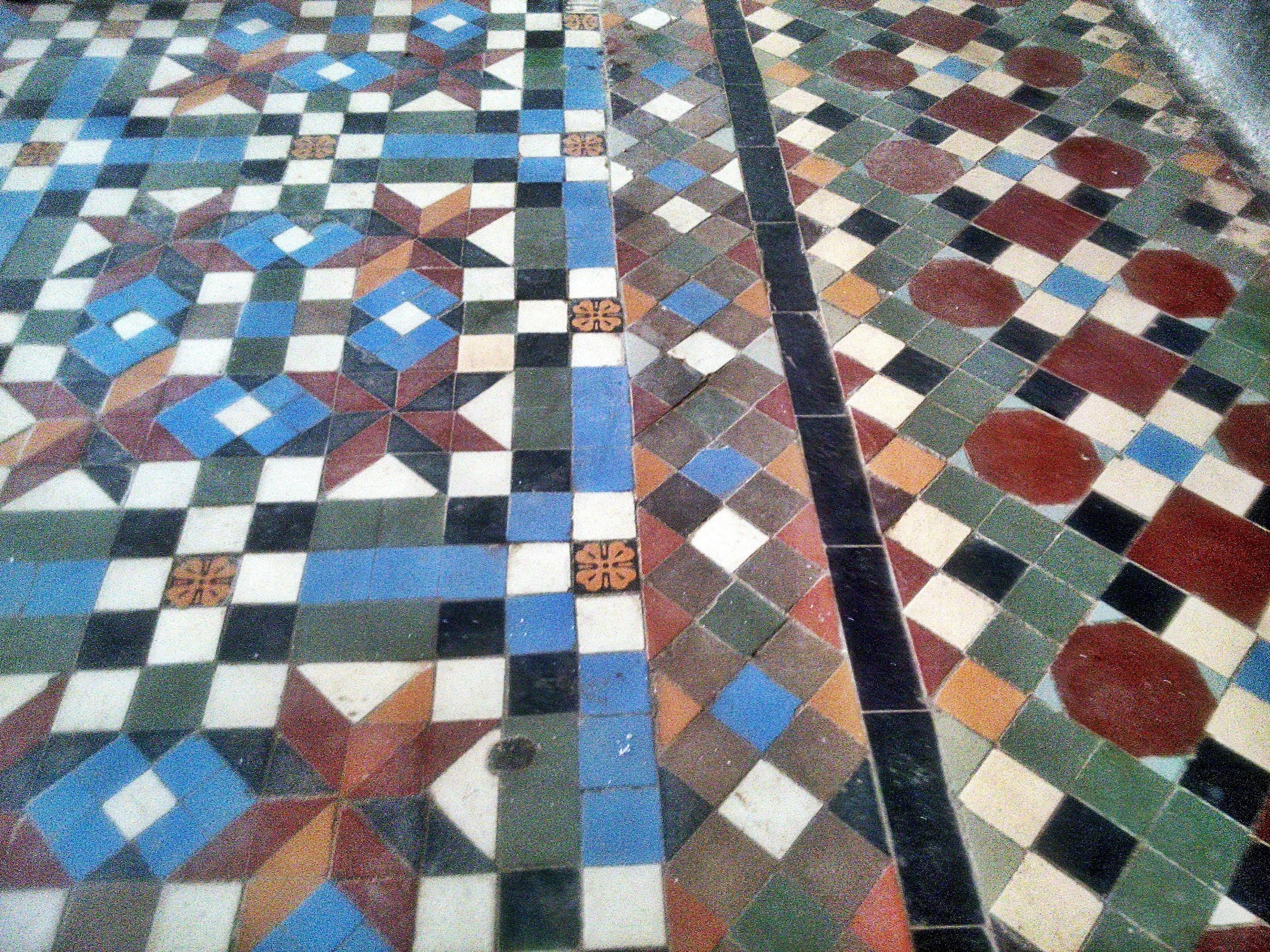 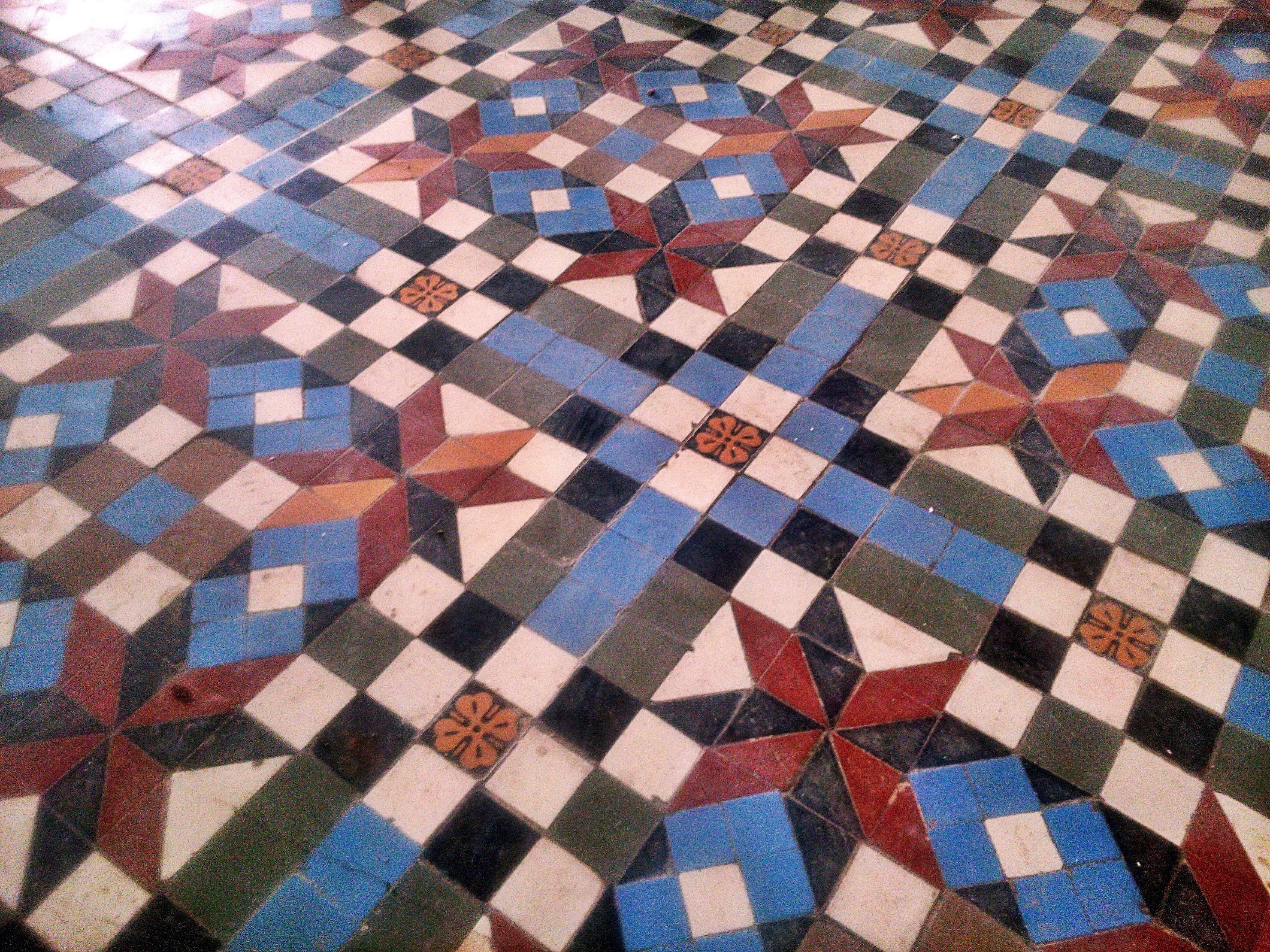 The pick of the find was that stunningly beautiful tiled mosaic. In pure contrast to the dull grey concrete floor so common in the waiting rooms, this one had a beautiful arrangement of colours, glittering and bright. Shades of blue, turquoise, green, crimson, red, black, brown and many others, neatly balanced and organized into beautiful geometrical patterns. One of my hosts, while showing me around had this tinge of pride in his tone as he told me that there were only two railway waiting rooms in Pakistan having such tile arrangements. The waiting room appeared to be littered with scattered furniture pieces of which there were two Chairs Long Arm (a.k.a Bombay Fornicator). The furniture stock on charge of the Waiting Room was well on records duly stamped by the Station Master, beside the display of which there was the time-table announcing an up-track and a down-track train from the old times.

A mentor and guru, Salman Rashid in his article on Mandi Sadiq Ganj mentions of one Bumba Mail, the stories of which from the glorious past of the railway junction, were told to him by the attendant on the platform. The intricate romance of the tale tempted the great author to relive the memory of some train originating from Bombay and passing through Mandi Sadiq Ganj outbound to the grand destinations. I wasn’t afforded the luxury of storytelling by my hosts that day, but had my share of the nostalgia in that vintage waiting room. In the sun rays that drifted past the stained glass window panes, I enjoyed a reflection from the past days; the glorious days of Mandi Sadiq Ganj. I reclined on one of the fornicators, imagined myself to be a traveller in transit to catch some train from some origin in a time from the past and prepared myself to embrace Bhatinda up ahead for Delhi in that virtual time capsule. Dear readers, a recline on that sunny morning, in the waiting room of an isolated railway outpost was worth the outreach, well worth it…

I am a teller of old tales. History, folklore, military, and more. Mostly covering Pakistan, my homeland, but also the Great White North, where I am currently settled.
Follow @meemainseen