Barbie, Made as Pakistan

It all started with a conversation involving a women elder of the village who remarked that they didn’t have a future. In response to the “why” from Dr. Senta Siller she said, “there’s no school here at Thatta Ghulamka, no doctor, no road, not even electricity. Our kids won’t get a job”. This conversation inspired a few decisions by Dr. Siller who then opted for an early retirement. The real deal wasn’t the early retirement for her, it was the decision to live with the women folk of this far flung village of Pakistan. A small village that comprised of scattered hutments made of sun baked bricks. Dr. Senta Siller lived amongst them in those kucha houses for five years. The result was a systematic vocational training to the village girls and the product was the most traditional of the toys, the dolls.

The village we have read about is Thatta Ghulamka Dheroka that lies in the suburbs of Okara. Here, dear reader, since 1992, two full time German Volunteers Dr. Senta Siller and Dr. Norbert Pintsch are working with local villagers to change lives and they have brought about a revolution. What started as a small scale vocational training project just within three years got transformed to a well established Women Community Center (WAC), the prime product of which developed into its own brand name Thatta Khedona (toys from Thatta) that has earned international acclaim by representing the country on a number of international platforms and are exported worldwide as the cultural handicraft souvenirs from Pakistan. Thatta Ghulamka Dheroka is now known to the world as a Pakistani Doll Village with its unique cultural handmade toys ranging from dolls, rickshaw and truck models to a variety of other handicraft accessories.

On that mid June afternoon, I had left the confines of Okara Cantonment after attending a reunion organized by my regiment, “The Three Arrows”. As I took the driving route to Islamabad, I deviated a bit and this detour was pre-planned. Back at the Reunion, there was this nice booklet compiled by the Adjutant. Apart from announcing some salient unit affairs and the programme of work it also contained a section about the places of interest around Okara. It was a pleasant surprise to note that someone had dug up the ‘Dolls Village’ and included a brief introduction of Thatta Ghulamka Dheroka. I had known the said attraction from the past but was yet to spare an outing. Finding Thatta Ghulamka in that booklet just made it a “must do” event on that reunion trip. Consequently the route from Okara to Islamabad was looped around Faisalabad and having left the cantonment I found myself at Gamber Railway Phatak to take on the Gamber-Noor Shah road. That was a shortcut to reach Bangla Gogera from where I had to ply on Bangla Gogera – Jandraka road to reach Thatta Ghulamka. On Jandraka Road as I inquired from a couple of people about the intended destination the focus of conversation got invariably directed towards the intent of visiting. As I disclosed that I was there to see the ‘doll craft’ I instantly was afforded company. Wilayat, himself a visitor to Gogera that day was a volunteer to accompany me to the place. The sole reason was that he himself had heard about the place but was yet to be there. Having a visitor (from Lahore) for the village of dolls was taken as a surprise cum wake up call and Wilayat opted to hop in without a second thought. On that mid June afternoon, dear reader, we both left the Jandraka Road to take on another looping road to Thatta Ghulamka and it was later we came to know that the metalled road to the village was one of the blessings of ‘Thatta Khedona’, the self help ‘doll project’. 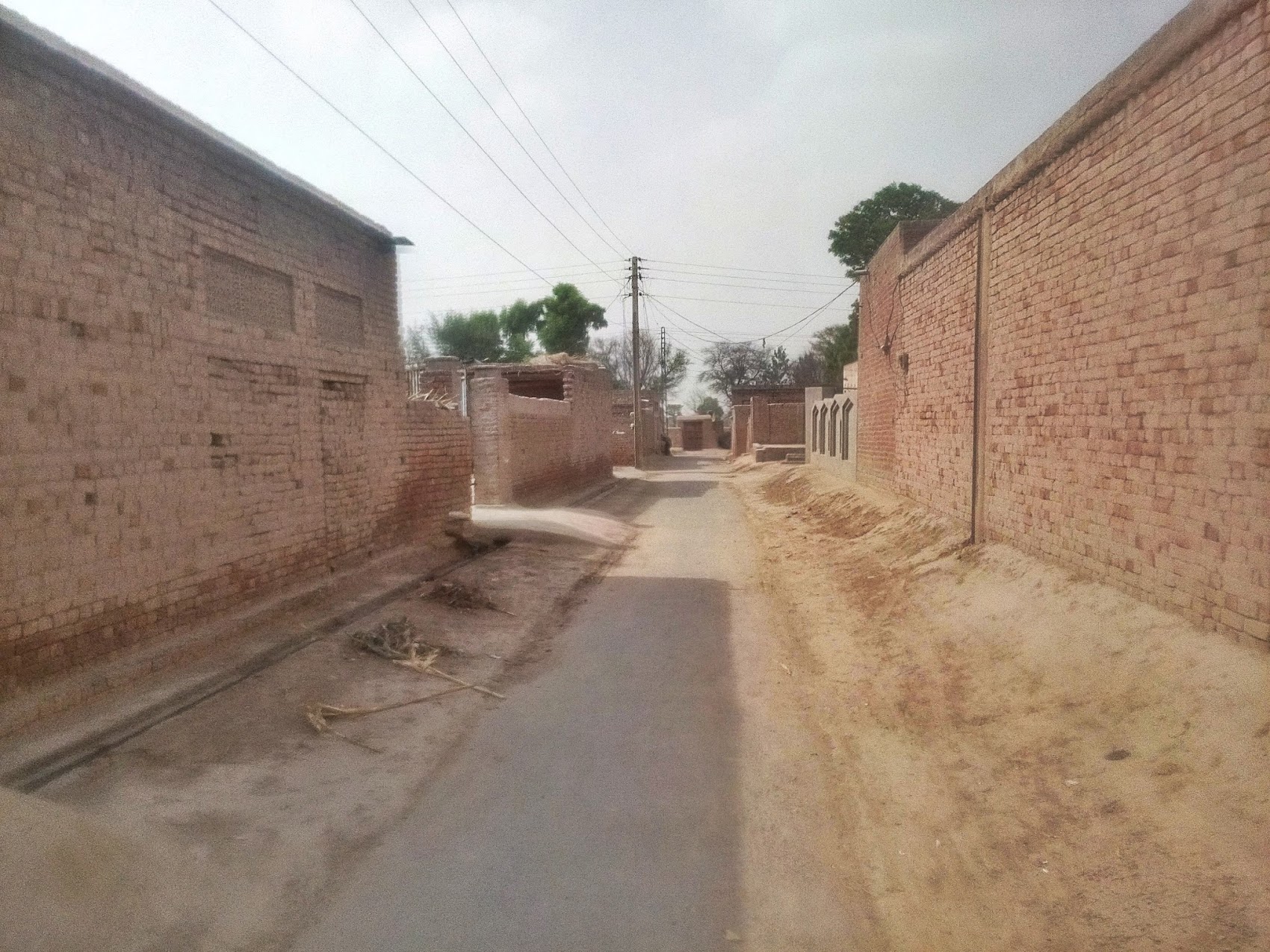 Thatta Ghulamka is a small village, the kind that goes unnoticed on a cursory observation. The prefix ‘Thatta’ in literal terms declares it a makeshift settlement, not itself a village but a peripherial hutment to one neighboring village. This was the place, where back in 1992 Dr. Siller alongwith Dr. Pintsch had visited to honour the invitaion of one of their students in Germany whose soul belonged here. What happened as the outcome of the said visit, dear readers, has already been shared in the start of this post. The village amongst its elders had that craft of making dolls, a craft that had travelled heart to heart amongst the generations but had gone obscured under the sands of time. Dr. Siller had an eye to spot the same and decided to take on a primitive vocational training project to revive the lost art and in doing so trying to bring about a change to the people’s lives, a change to the life of Thatta Ghulamka itself. A vocational training workshop started on self help basis, where the village girls were trained in the art of making dolls, in the most traditional way; the way of celebrating the local culture of Pakistan. These cultural dolls were initially sold to the people from diplomatic missions stationed in Islamabad and the labour was paid. Soon the product “Thatta Khedona” was to excel in the craft of doll making and was to cross the international frontiers to represent Pakistan, to represent the skill of the residents of a remote village from Pakistan. The vocational training workshop is one established Women Community Center (WAC) now, where not only dolls but other traditional toys and accessories are made through an organised effort from local girls and boys. These cultural toys get showcased at a variety of international exhibitions and are shipped to meet the demand placed through international orders.

I and Wilayat were greeted by a group of locals, offered a charpoy and people were sent to fetch drinks. Subsequently two individuals took on the responsibility of guiding our tour and we reached the Community Center. The center was closed for summer vacations, yet a workshop room was especially opened and the lady in chair of the proceedings greeted us with a smile. The room contained a few of the toy samples and some work in progress. We were told that the production depended on the demand orders that were received and the center does not keep stock of the handicrafts. We browsed the samples on shelves and were mesmerized by the premium craft on display. The room also had various certificates of merit hung on the walls along with a few framed photographs. In one of the photographs was Dr. Siller sitting with the lady-workers from the village and there were broad smiles everywhere. Our conducting lady sensing our interests, offered us to complete a Kochi doll in progress for us and we gladly agreed to the deal. As she got busy with the mini project we took a stroll in the community center with our tour guides. It was a two storey compound with the main office and workshop / training rooms on the ground floor and the residences on the top floor. We were told that the gora prople (Dr.Siller and Dr. Pintsch) visit the place every year in the months of March – April and reside in these rooms as they organize and maintain the place for the year long functioning. A plaque near the entrance announced the Women Community Center (WAC) inauguration in the year 1995 and the main contributors (Japan, Canada and Germany) towards establishing the center. The standard of the building and the aesthetics (tile work and others) indicated that the construction work must have been outsourced. It was confirmed by our accomplices that the masons were especially summoned from Harappa (near Sahiwal) for the quality in construction. As we came back to the display room, our doll in traditional Kochi dress with all accessories to include the dopatta tucked in a round cap, the jewellery and the shoes was ready for us. Dear readers, I must confess that we carried the custom finished doll as a souvenir, our own piece from Thatta Khedona and we did that with pride.

In the urban dictionary of our rural customs, a visitor is always a guest; is greeted and is waved goodbyes in an organized fashion. Being a guest of the entire village I was led to the chaupal (gathering) of the village folk who were there waiting for me to return from the visit of the ‘Doll House’. Huqqah was in run and the tea was on its way, as we talked about Thatta Ghulamka and the fame of Thatta Khedona. There were a lot many words, phrases and sentences said and heard, but the crux of the conversation was said as I quote:

The people of Thatta Ghulamka bear witness that the gora people (Dr. Siller and Dr. Pintsch and their team) deliver what they promise through a fare and square deal. They bear witness to the prosperous change they have been through within their life span. Each household gets paid a fair amount that varies from Rs. 5K – 25K per person as per the labour and hours worked. The road leading to the village got the metalled surface because of the project, the government school in the village has been well kept and maintained and lately gets powered by solar cells, the Women Community Center itself is powered up by solar energy. There has been a productive upgrade to the lifestyle and standard of living at Thatta Ghulamka. Dear readers, a village from Punjab hinterland on this day stands out as a symbol of self help, a tale of possibilities originating from the odds and as an icon of unprecedented entrepreneurship. These are my people and this is my country I very dearly own and take pride in…. 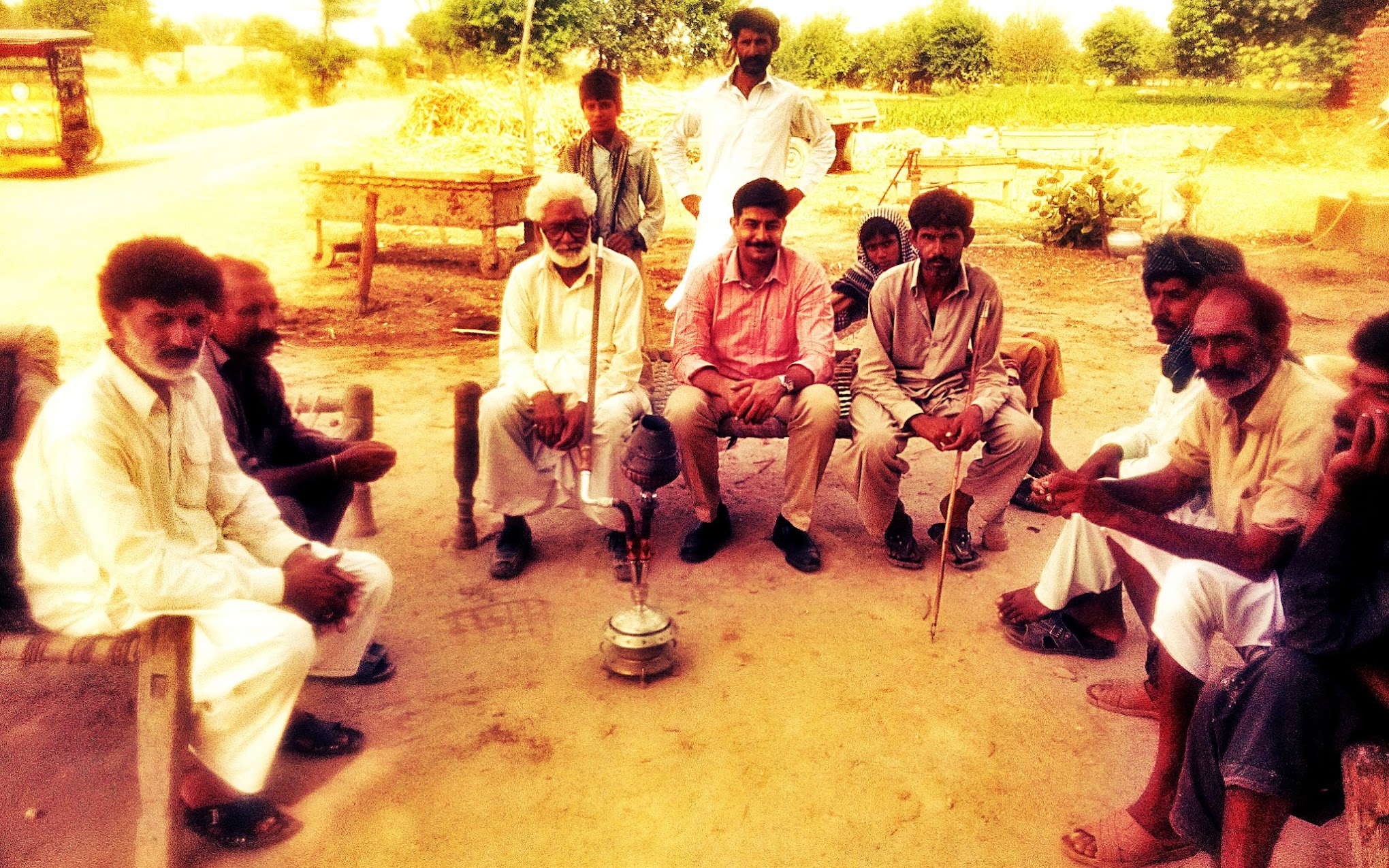 * This post gets dedicated to Amelia Saeed, my daughter who has always been a dolls’ girl and who is an inspiration behind this venture.