I was there on the trail of a Kos Minar reported to exist in the vicinity of Golra Railway Station. It was a referral from the department itself and I also carried a documented evidence to support my search. During a visit to Lahore Fort in search of some relics on display I had met a survey photographer of the Archeology Department. While exchanging notes on Kos Minars that existed on the ancient Grand Trunk Route in the vicinity of Lahore, this gentleman mentioned a Kos Minar at Golra as per the departmental records. A search on internet; and it’s a pity that there is no dedicated website for both Federal as well as Provincial Archeology Departments, I came across a news article published in Daily Times Feb 23, 2007 that announced the transfer of 147 Historical Sites through a Supreme Court Order from Federal to Punjab Archeological Department. There, dear reader, amongst the list of historical sites of Rawalpindi District was listed ‘the Kos Minar near Golra Railway Station’. Having bagged the documentary evidence as I headed to discover the said Kos Minar, I learnt that there are monuments long gone physically, but whose ‘paper ghosts’ stay in the departmental records and their possession keeps oscillating to and fro as awarded by the Courts, Supreme in their ruling. Before my readers start to think that this post is about the disappointment of not finding what I was looking for, I must control my emotions and state that it is in fact about the excitement of discovering something entirely different. Initially out in the open for the romance of Jarneli Sarak, that afternoon at Golra, I found myself sweating in the love of Railways and, dear reader, I am not talking about the Golra Railway Station and its Heritage Museum…. 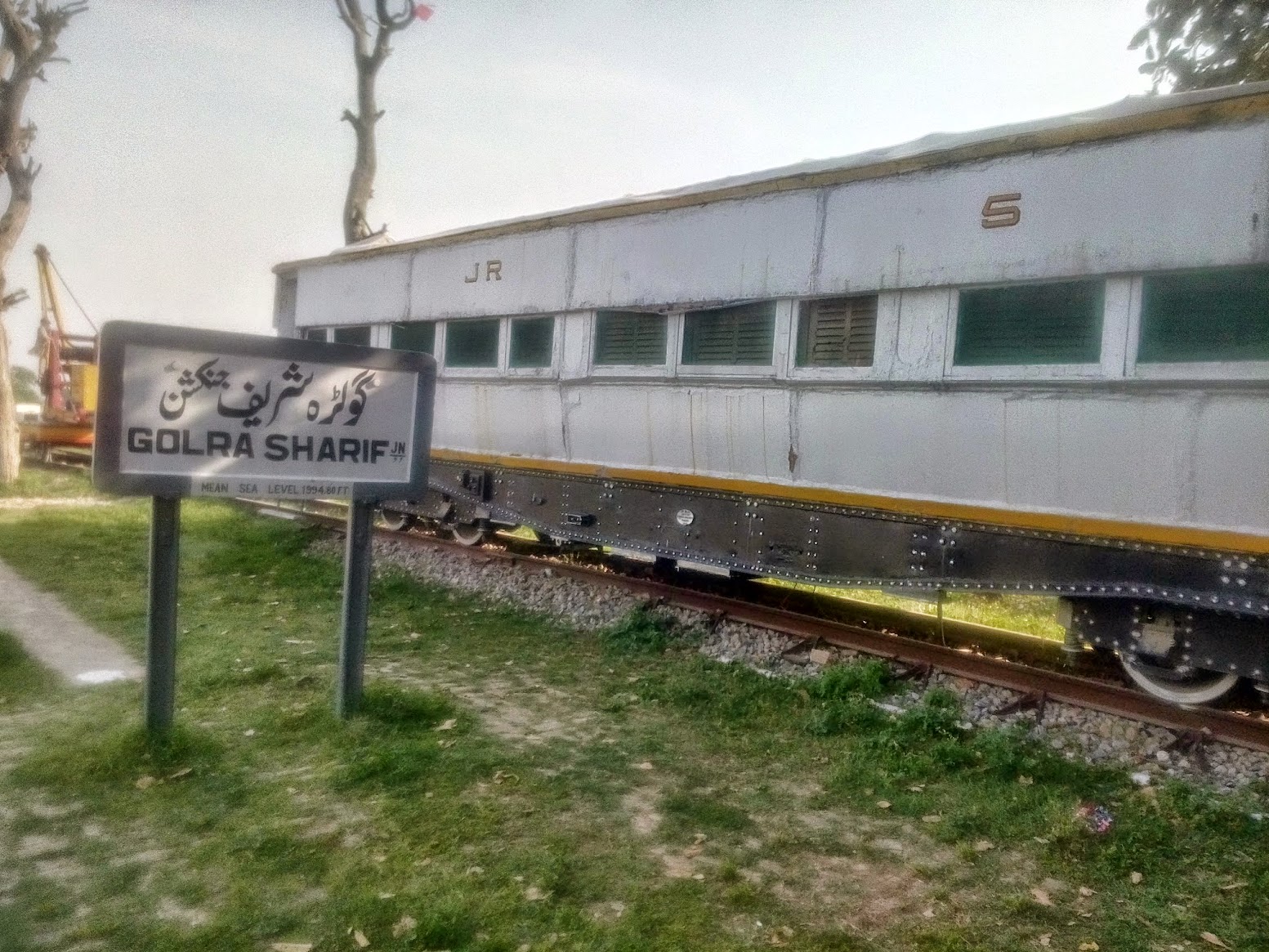 From Golra, being a Railway Junction, diverge two tracks; a broad gauge branch line that through Basal leads onto Jand where it gets further bifurcated towards Kundian and Kohat. The other main line track moves towards Taxila and goes on to Peshawar and eventually culminates at the legendary Landi Kotal Railway Station. It’s this track (main line) if one follows from Golra Junction towards Taxila and follows with some determination, having covered a distance of around 2 – 2.5 kms eventually encounters this typical land feature that locals refer to as “khatayaan” کھـٹائیـاں where (again in local term) a ‘gumti’ گُمـٹی is reported. The clue to above said discovery came my way during (insert desperate here) investigations from the locals about the Kos Minar that existed at Golra. I met people of middle to old ages that belonged to Golra and grew up there playing in the streets and the surrounding stretch of agricultural fields. None remembered any feature of the resemblance with Kos Minar (around 8 feet high obelisk with thin bricks, round or square platform etc.) that existed anywhere in the surroundings of Golra. There at a tea stall while in conversation with this baba ji of age (local dialect and language partly interpreted by his middle aged accomplice) who mentioned that an item of Railways antiquity existed at Golra. “Just follow the railway tracks to Taxila and just where it clears the residential buildings there are these ‘Khatayaan’ where there is this ‘Gumti’ that was used in the times of Gora Saab”. Dear readers, I happen to carry the love of railways in my genes, and it was this love that surged within me as I finished the tea cup in haste to embark upon the tracks without even the slightest clue as to what was meant by “Khatayaan” and what on earth a “Gumti” was!

Having covered around 2 kms from Golra Railway Station, the up railway track on main line takes a turn and it’s there just after crossing a mini culvert it enters into a cutting with ground raised high on both the sides in the shape of a small hill. There on the top of left hand side hill was this structure that appeared to be part of an old fashioned railways signaling system. Upon reaching the hilltop I discovered an iron pole raised high with the remains of some pulley mechanism. Beside the Iron pole was this roundish cabin made of bricks the dome of which was plastered from the top. This was surely a Train Signal Mechanism of early times with the cabin for the signal operator, but I had come across this type for the first time. The “Khatayaan” in fact referred to the high cutting from which the railway tracks passed at the bottom level and the “Gumti” was this complex of the cabin and signal tower. 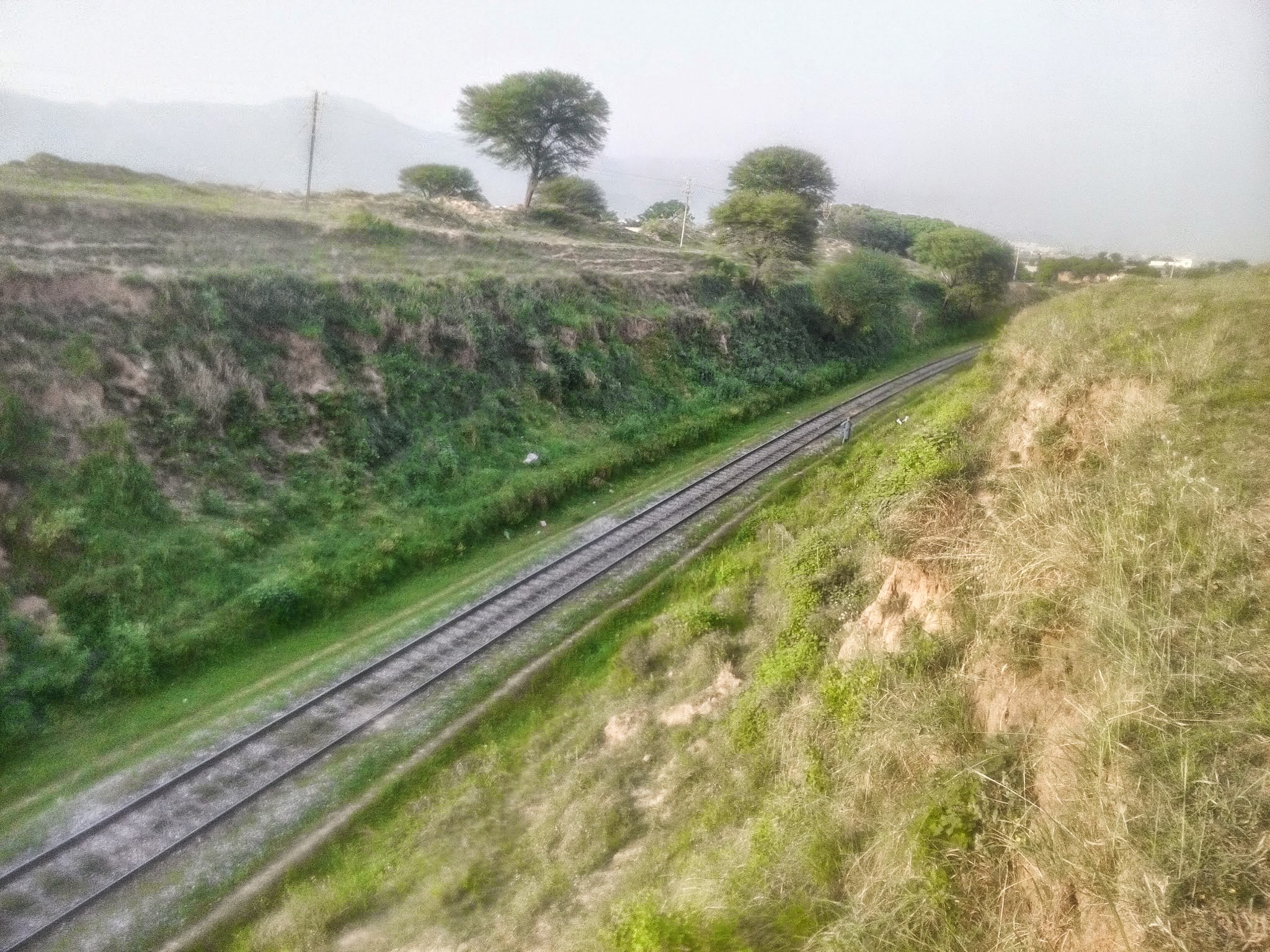 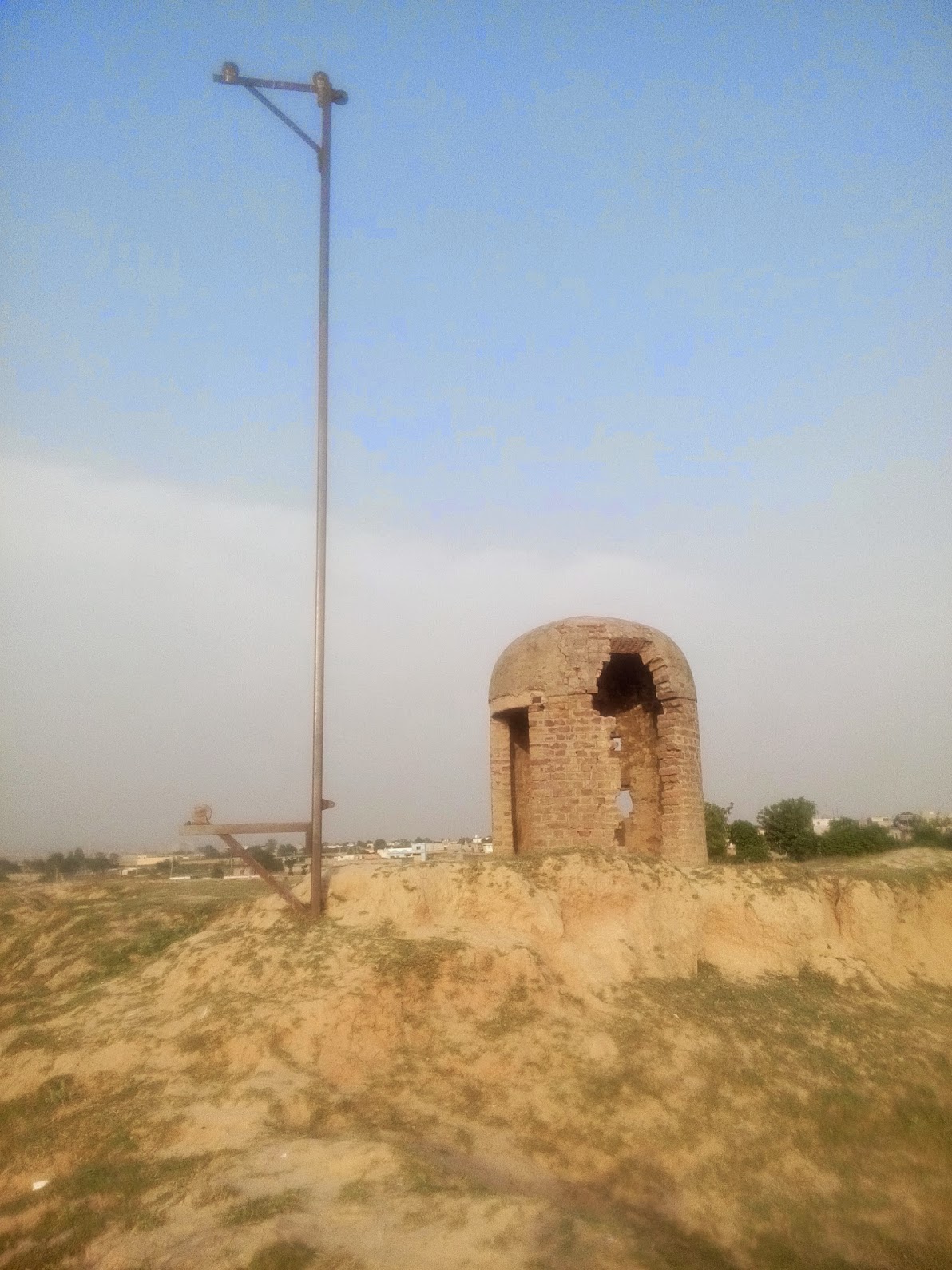 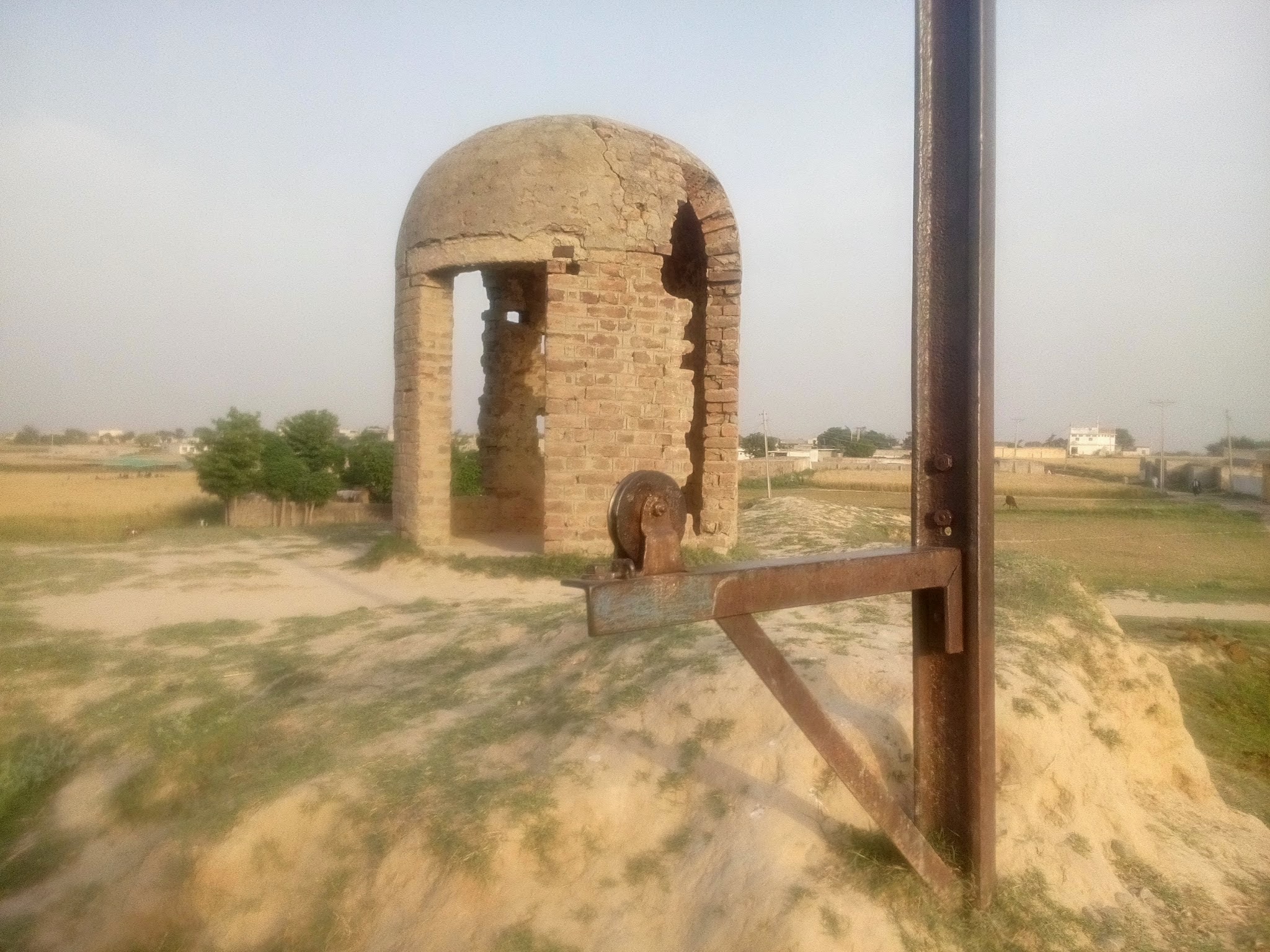 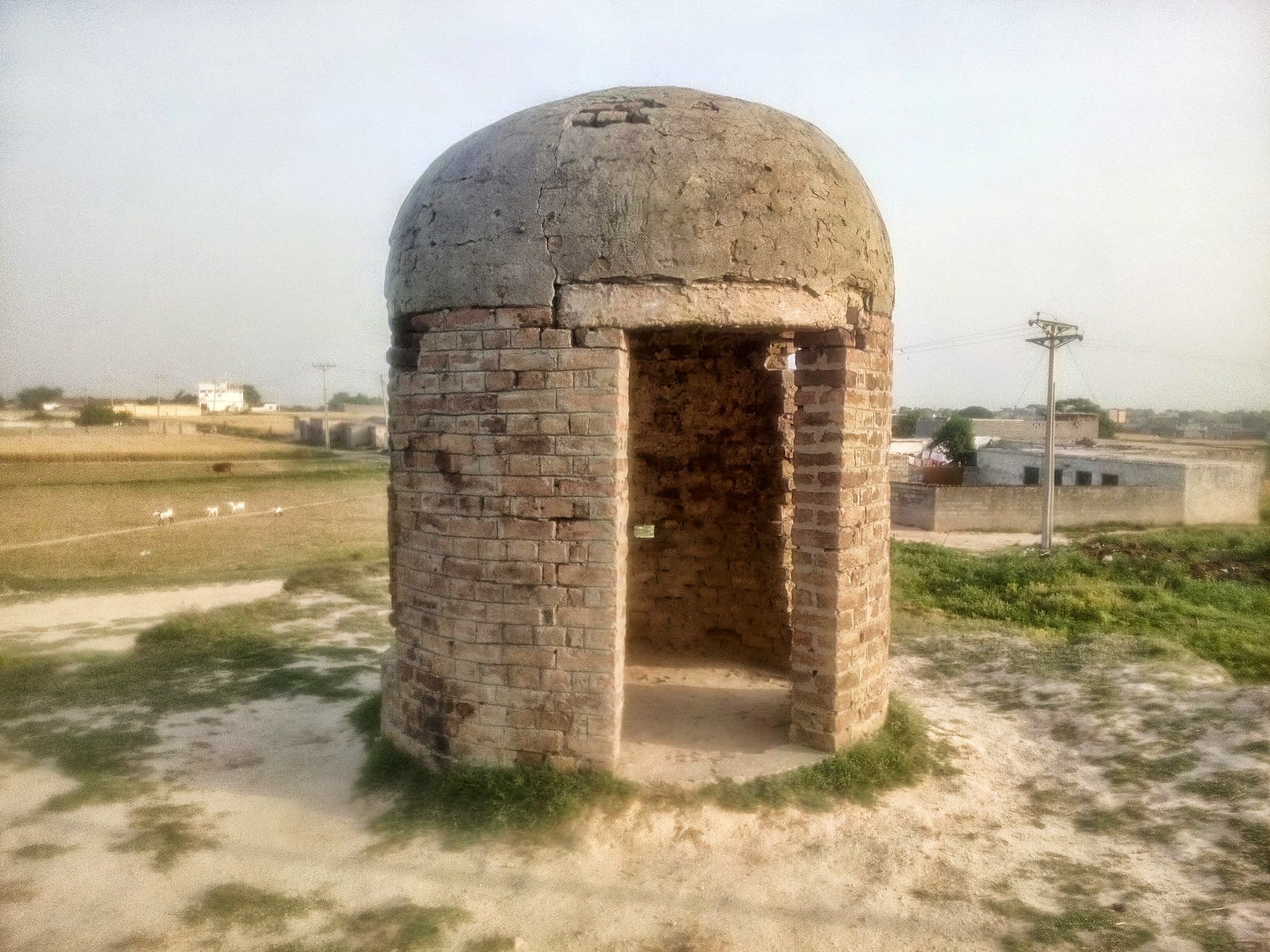 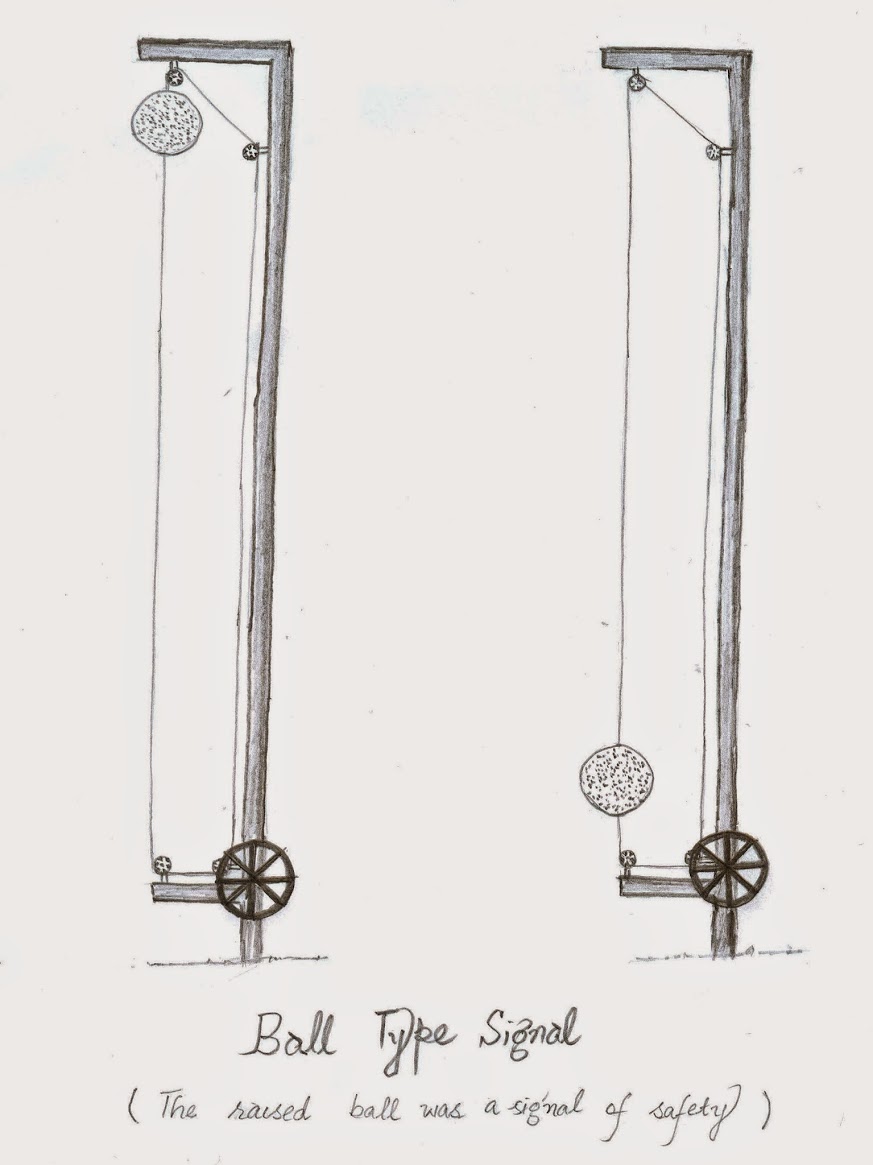 This find let me to further explore the type of signaling mechanisms used in railway history and I came across interesting pieces of information. From hand signals, semaphores and others I browsed through these to eventually find the kind that, dear reader, we came across in pictures galleried above. It is one of the early signaling mechanisms that were manually operated and is called Ball Type Signal (also referred to as Highball Signal). It consisted of either a disc or a sphere hoisted up an iron mast operated through chain / rope mounted on pulleys. For night signals usually a lantern hung with the disc or sphere was used. An illustration of the same is presented for my readers. The ‘aspect’ of the ball in high up postion was translated by the train driver as an ‘indication’ of the clear track with the permission to proceed at speed. The origin of Ball Type signal is traced back to the United States with scanty uses in UK. It predates the semaphore signals and is reported to have been rarely used. In such a scenario our Ball Type Signal at the cutting ahead of Golra Railway Junction is one rare surviving example. Keeping in mind the dates of laying of Rawalpindi-Peshawar railway track and the Golra Station itself, the time of this structure is fairly estimated to be late 19th or early 20th century.

On my way back towards the railway station I came across Yusuf, the cabin operator, a seasoned employee from Pakistan Railway. There in his workplace crowded by the hand operated levers of the present day signaling mechanism at Golra, I discussed with him the day’s find, the Ball Type hand operated signal, the ‘Gumti’. He mentioned that in good old days, when there were no communications, these sort of signals were installed at the places with restricted line of sight (a turning and a cutting in this case) to indicate to the train driver ‘all clear’ or otherwise for the tracks ahead. This was particularly useful when the Railway Trollies (for inspecting and maintaining the tracks) were out on their tasks. Yusuf mentioned that a ‘Tawa’ (round iron disc) painted in three colors (red, yellow and green) used to be hoisted on the ball type signal with a lantern attached for night signaling. A raised ball gave an indication of a clear line to the driver whereas a lowered disc indicated an unusual activity and a signal to the train driver to stop. I came to know through Yusuf that the signal was operated through an iron chain mounted on pulleys, operated by the hand-wheel. That chain and the hand-wheel have been lost to the cruelties of time and neglect.

A couple of kilometers away from the shine and glare of a handful collectibles at the Golra Heritage Museum lie this priceless relic from the Railway’s past, eroded and almost forgotten. Restored to its functional state, this could be a nice addition to the museum artefacts. But, and my readers would also agree, where a documented Kos Minar vanishes from the sight leaving behind a battle for custody of its paper ghost, what chance does an old Railway Signal stand, the one that’s not even documented anywhere!