In love of Thakot, In warm lap of Pattan 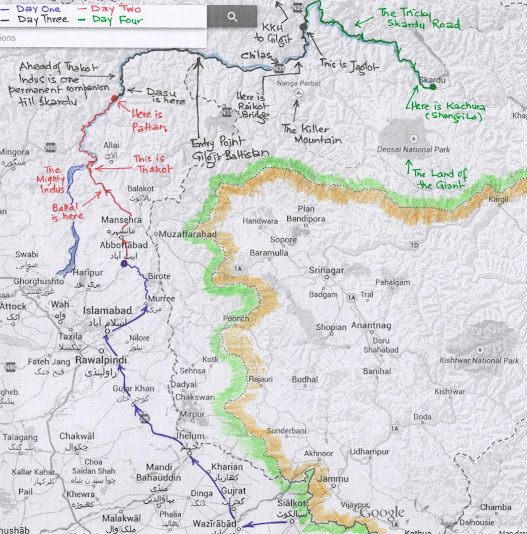 There are two basic requirements when it comes to being my drive-buddy; playlist and the car-deck volume strictly of my preferences plus haphazard intervals of meaningless chat. Consequently there are very few who qualify to be my companions and I frequently end up driving solo on long routes. It was not different from the standard as I packed up and got ready to embark upon the journey of my dreams, driving along the stretch of KKH, a journey from Sialkot to Skardu. Suzuki Motors (Sialkot waley) were very kind to inspect in detail my car, A Suzuki Mehran VXR and issue a fitness certificate for the travel. Though their technical know-how of the route was limited to the questions of the like “Skardu Sialkot ton kehrey paasey aa, rah kaccha ae ke pakka?” I did not question much on the reliability of the fitness and preferred a physical inspection myself before plugging in. That car had endured quite an outreach with me and I had fondly titled her ‘Rani’ and that was all the confidence I needed to be on board. Being a traveler on KKH earlier and having some know-how of the distances involved and the hazards of the night travel, the journey was conveniently broken up into four legs to be undertaken on four days: Sialkot – Abbottabad – Pattan – Jaglot – Skardu (details annotated on the inset – map)

Here I must admit to my readers that till Jul 2009, the time the above said travel was undertaken, I had not visited Murree and in a way it reflected as a stigma on my ‘Explorer Resume’ (otherwise rich with the flavors from North as well as South) as people used to question everything once came to know of the fact that I was yet to see Murree Hills! Accordingly the first travel-leg from Sialkot was planned via Islamabad – Murree – Nathiagali – Abbottabad. Abbottabad was selected as the first RV as a night stay had to be realized with the faculty members at Pakistan Military Academy who were my associates on the previous posting. That was the first time I traveled on Murree Expressway and was impressed with the road standards and enjoyed the scenery and the winding hill-roads. Driving and romancing with some beautiful landscape I eventually met the drop-scene right at the place where the route to Murree is pulled out, almost a U turn style from the expressway and is lifted to a formidable incline for the wheels. It was July and Murree was swarming with the tourists of all kinds. Stuck in almost a vertical traffic jam for more than two hours and moving at a snail’s pace almost testing to the limits the driving skills on a manual-transmission car, I eventually decided to skip the Murree entrance at Muzaffarabad Chowk and headed towards Abbottabad. Visiting the charm of Murree Hills, dear reader, got eventually accomplished a year later, a feather now I try to decorate prominently whenever I boast about the traveled territories. At the first halt-point, Abbottabad the stay at the Military Academy was nostalgic, the icing on the cake was arranged by a colleague officer who coordinated a somewhat informal meet with my cadets. These cadets were halfway through once as their Platoon Commander I handed over the platoon on my posting out of the Academy. They were now ‘seniors’ gearing up for their passing out. It was one memorable gathering over dinner. 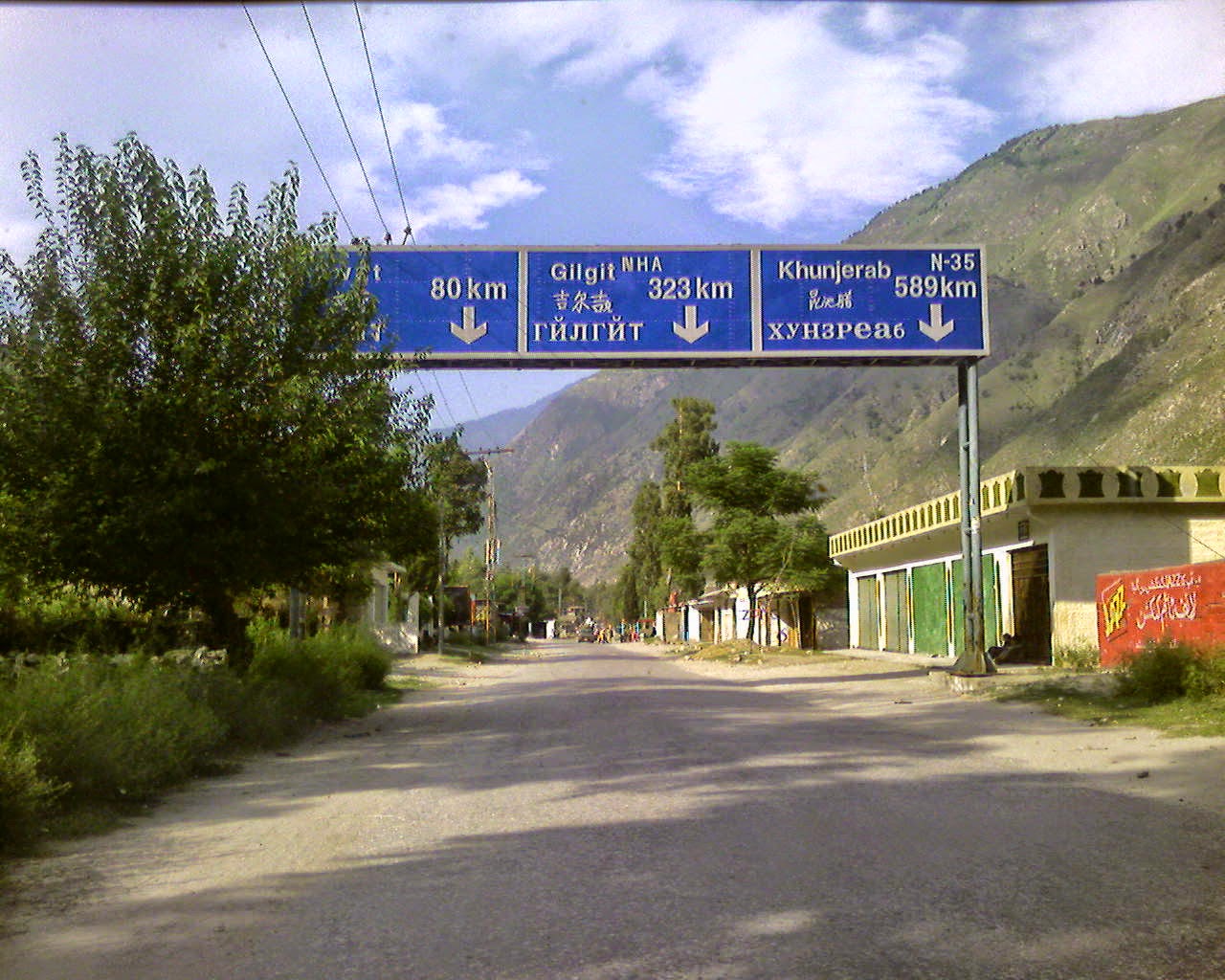 Dear reader, the highway to Gilgit starts right from the exit off GT Road at Hassan Abdal, a fact that gets duly verified by the overhead signboard announcing the distances to Gilgit and beyond. The real touch of Karakoram Highway is encountered beyond Mansehra as one heads towards the Kohistan Hills. Ahead of Mansehra lies the town of Shinkiari and further up ahead towards Buttel the landscape remains fairly flat as one encounters those experimental “tea fields” and the Chattar Plains. Approaching Batagram the terrain starts getting folded and narrows down astride the highway that winds uphill at a gradual slope. The scenery stays green and appears to be the likes of Abbottabad surroundings. Having crossed Batagram, after a few winding mazes, the road straightens and a breath of that watery air greets you and in anticipation of it, the sights get dearly laid to catch the first glimpse of the Mighty Indus. The heartbeat gets majestically magnified such that it’s felt rhyming that beautiful name ‘Thakot’. And then one encounters Thakot!
… and here, my dear readers, instead of describing the feeling in bad taste I shall rather hand you over in a brief keeping to Mustansar Hussain Tarar, who in his signature way would have his take …

It is at Thakot that Indus is crossed over a magnificent suspension bridge and it becomes one permanent travel companion all across the stretch of KKH till Jaglot and further ahead on Skardu Road. It was a special feeling as I stopped the car on the roadside and greeted Indus with a pleasant smile. There was this water from snowy peaks, flowing downhill with a formidable roar. I couldn’t wait to drive a few yards further to greet Indus beneath the magnificently suspended Thakot Bridge. It was a sight of the sights and I had imagined it countless times, in fact every time I had come across Indus down the plains. Atop the bridge are these beautifully carved miniature dragon-heads, the signature Chinese masonry artefacts. Thakot Bridge was guarded by Pak Army troops and there in the company of an energetic subaltern I enjoyed the afternoon snack purely made of the Fauji Ration. Resuming the journey I greeted Besham, the gateway to Swat Valley and geared myself to embrace the tricky driving stretch on Kohistan Hills.

The stretch from Besham to Dasu is one tricky part of KKH that gets defined by some sharp faced mountains of Kohistan Hills where the KKH is carved at quite a height affording a spectacular view of the winding road. Those who find themselves driving the wheels, encounter a vertical wall towards the mountains and a vertical fall towards the Indus with the sharp turns putting to some real test the hill driving skills. KKH here tells you of the engineering marvel and the determination of the ones who carved it out of the mountains with unmatched skill that makes this road one of the wonders of the world. You get reminded of the sacrifices made for building this roadway through the monuments (and quite a lot of these) that are nailed on the roadside along the stretch of KKH bearing the names of the ones losing their lives while building as well as maintaining it. Maintenance at KKH, dear reader, is one heavy task in itself. The formidable obstacles are the landslides that when occur, wash away a portion of the road partially and on occasions in entirety asking for a rebuilding of the washed away face of KKH and that is undertaken by the Army Engineers quite frequently in an endeavor to keep the life-line with Gilgit Baltistan up and running all the times. As a courtesy, I made it mandatory to myself to stop my car almost at every Shaheed Monument, prayed for the departed souls and offered a salute to some skilled craftsmen. May they rest in peace and may their names live long to glitter on the shiny face of KKH. 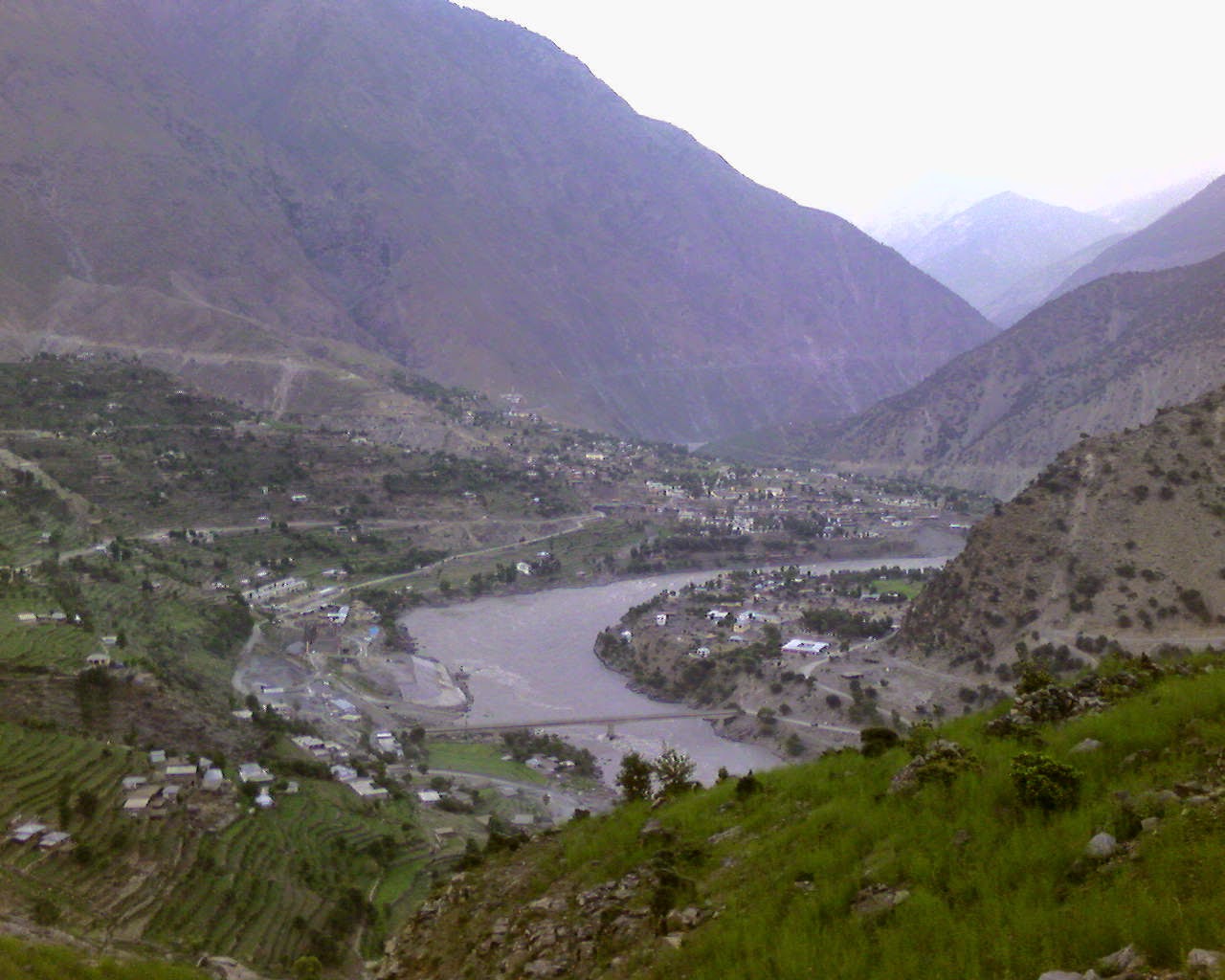 The sun rays were reflecting bright on the hilly terrain being at an angle that is formed in the preceding moments of a sunset as I got exposed to the valley of Pattan, the culminating point of the day’s leg. There was this twinkle on the hills of Pattan that drew my attention and as I stood facing the valley enjoying the first glance, I discovered that it was more than a twinkle in the eye, it in fact was a smile worn on the face in that stretch of hills. Pattan was my host-valley with arms held open in an embracing attire for the traveller who had discovered her after wilfully losing himself to those majestic mountains of Kohistan. At that particular instance, as I revisit the feeling now, dear reader, if you come out to ask me whether I was tired or fatigued, I shall flatly deny that. I stood there fresh, with all the energy bustling up within me in entirety. Before that particular moment in time I merely had read the phrase ‘land of hospitality’, but on that outstretched dusk I actually saw one!

Ladies and Gentleman! on that cold mid-summer night, Pattan looked me after and looked after well. Of the many colors being carried in my heart there is one distinct ribbon attached to Pattan and I can vividly pick that even today, now that half a decade has passed since that night in the ever hospitable valley…