In The Lion’s Den

Inside Ingall Hall, at Pakistan Military Academy Kakul, alma mater to Men at Their Best; there is a quote that goes like, “It does not matter what happens to me; what matters is how I behave while it’s happening to me.” Captain Karnal Sher, exactly did the same; in forgetting what would happen to him, he, with a handful of souls, heavily undersized in number and arms, moving uphill at the highest battlefield on earth, in broad daylight launched a daring counter attack right into the heart of on looking enemy. The ferocity of his daring attack won Captain Karnal Sher the respect of the enemy defending the Tiger Hills who deliberated upon him as “The Lion Karnal Sher”. The brave Captain’s citation was originally written by the Indian commander with the same title (published in The Indian Express dated July 16th, 1999). The official citation by Government of Pakistan recognized the young man to be the symbol of extraordinary courage and valour among his peers and honoured Captain Karnal Sher with the words, “Through his deeds, Sher (urdu synonym for Lion) carried his True Name.”

Kargil Conflict (1999) between India and Pakistan, holds numerous stories of courage and valour from both the sides. The two prominent ones from Pakistan being those of Capt Karnal Sher Khan Shaheed and Havildar Lalak Jan Shaheed, both recipients of Nishan e Haider, Pakistan’s highest military decoration for extraordinary bravery in combat.

As a prelude to the defence day (celebrated Sep 6th each year in Pakistan), I decided to pay homage to one of the brave sons of soil, Captain Karnal Sher Khan Saheed, Nihsan e Haider. A professional counterpart Nihal accompanied me as we plied on the road Mardan –  Swabi to reach Nawan Kalli renamed to Captain Karnal Sher Kalli to honour the brave hero. Nihal proved to be an effective aide–de–camp; a companion on the trip, an interpreter to interact with the locals (though a Khattak with Bannu accent of Pashto interacting with Swabi natives was a scene in itself) and a navigator to find the way out to our destination. It was different, as there were two modes of communication running in unison, interior of the car it was Urdu and at the exterior end it was extensively Pashto with a blend of Bannu and native accents ….. and it was fun. We did manage to spare time to tune into a melodious patriotic stream eloquently sung by Zarsanga and Daud Hanif; Shinwari Lawangeena (my land, my sweetheart)  …the essence of a Pashtun’s love for his homeland. Feelings identical to that must be running through the heart of Karnal Sher while he was charging on the battlefront.

Captain Karnal Sher, the pride of Swabi lies buried in Captain Karnal Sher Khan Kalli right beside the Mardan – Swabi Road. The tomb built by 12 Northern Light Infantry Battalion, Haideraan (Karnal Sher’s regiment and the only one in Pakistan Army with a distinction of having earned two Nishan e Haiders in the defence of motherland; the other one being Havildar Lalak Jan Shaheed) is being looked after by the family and is visited by a number of people to offer fateha. The grave is housed within a four pillar shed with a green dome on top. A white marble podium beside the grave platform bears the flagpole with Pakistani Flag fluttering up and high. The two front pillars bear the framed citations, one written by the Indian Commander and the other by the Government of Pakistan at the time of award of Nishan e Haider. 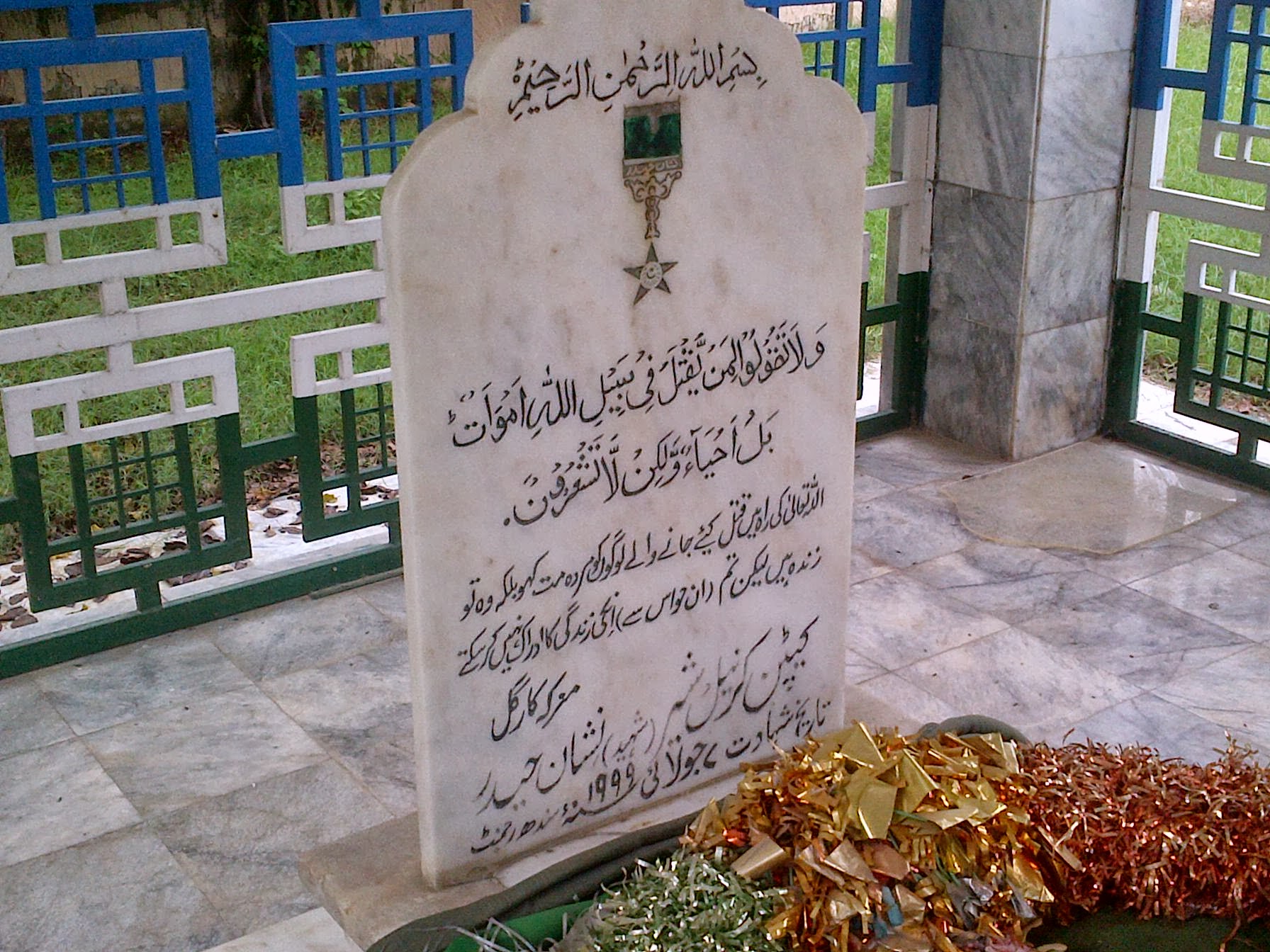 Captain Karnal Sher Khan from Pakistan Army won the respect of Indian Officers defending Tiger Hills and adjoining features with his raw courage and brilliant attack. Officers of both the 18th Grenadiers and the 8th Sikh Battalion watched the brave Pakistani Captain leading a counter attack to recapture the features of Western Spur on Tiger Hills on July 7th. He was very courageous. After the fierce battle we had recovered Tiger Hills on July 4th and for the next four days gradually advancing to recover other features “The Helmet”, “The Indian Gate” and “The Rhino Horn”. Soon after the soldiers of 8th Sikh Battalion recovered the features on July 7th around 8 AM, Captain Karnal Sher with just handful of Pakistani soldiers launched a swift counter attack. It was suicidal for Sher to launch the attack in broad daylight because we could see his move, yet in the highest of military traditions, he launched the attack. Such was ferocity of his attack that 8th Sikh Battalion had to be reinforced with a platoon of 18th Grenadiers. A number of soldiers from both sides were killed. During the battle even under adverse situation, Captain Sher rallied around his men encouraging them to fight on. The Indian side too suffered heavy casualties. Sher kept on fighting till the last until a hail of bullets snuffed life out of him. Even as he fell his finger was curled around his gun. We are professional soldiers and we would feel happy if a solider like him gets recognition for his bravery. We hope that young Captain Sher gets his due share though posthumously. Here in the Dras sub sector officers realized that they may not be able to communicate officially with Pakistan, therefore, the citation is being written on a plain piece of paper to be posted to Pakistan.
AFTER ALL
A BRAVE SOLIDER DESERVES TO BE RECOGNIZED

During the Kargil Conflict, Captain Karnal Sher Khan was posted to 12 Northern Light Infantry Battalion as Platoon Commander. During his tenure, Captain Sher displayed an unmatched feat of bravery and leadership and performed outstandingly during the battle of Kargil. His courage inspired a number of actions from his troops causing heavy casualties on the enemy. Before the onset of hostilities, Captain Sher established five posts at an altitude of 15000 feet and made an enormous contribution in making these defensible. The same posts later on played a key role in repulsing numerous enemy attacks.On night 7/8 June 1999, enemy attempted to infiltrate from the rear of Captain Sher’s post that was effectively countered by him. On ni 8/9 June, he along with just ten soldiers prepared a fighting patrol that attacked the forming up enemy and killed 120 enemy soldiers. On 5 July, enemy attacked Sher’s post simultaneously from three directions with heavy artillery support and initially managed to secure a foothold on his post. It was when Sher Khan though disadvantaged with scarcity of troops and ammo decided to launch the fateful counterattack. Such was the ferocity of his attack that the enemy forces were evicted from the post. During the counterattack Capt Sher received a volley of bullets on his chest and embraced martyrdom. This act of Captain Karnal Sher truly reflects the unmatched valour and extraordinary courage. Through his deeds, Sher (urdu synonym for Lion) carried his True Name. In recognition of his professional competence and selfless devotion, he was honoured with the highest award for gallantry, The Nishan e Haider.”

We also had the opportunity of visiting the ancestral house of Captain Karnal Sher, located further ahead in Faujoonabad, Charbagh. Captain Karnal Sher’s family was welcoming and hospitable in a way that has always been a signature trait of Pashtuns. The legacy of Capt Karnal Sher Shaheed, NH goes on in the valiant traditions of Khyber Pukhtunkhwa.